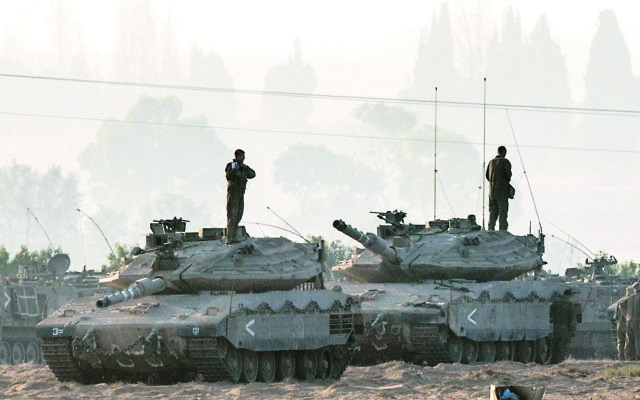 It was in the early hours of Tuesday morning that the Israeli military announced that it had launched Operation Protective Edge “in order to stop the terror Israel’s citizens face on a daily basis.” By nightfall on Tuesday it had carried out almost 150 air strikes on terror infrastructure in Gaza. Some 1500 reservists had been called up in case extra manpower is needed – and in case a ground operation takes place – while the government approved the call up of thousands more.

The IDF stated: “Since the beginning of the year, Gaza terrorists have fired more than 450 rockets towards Israeli citizens. The attacks have sent thousands running into bomb shelters and endanger the lives of millions of civilians.” As well as breaking general terror infrastructure the operation will “restore quiet” to the south.

US State Department Jen Psaki condemned the Gazan rocket fire to Israel and voiced American support for “Israel’s right to defend itself against these attacks,” and the European Union followed suit.

The threat to Southern Israel is not limited to rockets. On Tuesday evening, five armed terrorists tried to infiltrate Israel by sea, next to Kibbutz Zikim. A gun battle with soldiers ensued, until the terrorists were shot dead.

Residents of the south are feeling scared and beleaguered. “For people from Sderot it’s very difficult because we have the sadness from the killing of the three boys, and after that, the rockets came,” Sderot father of four Yigal Levi told The AJN.

His kids, like youngsters everywhere in Israel, have just begun their two-month summer holiday – and they are spending it between their garden and their bomb shelter. “They are always running to the shelter,” Levi reported. “We are trying to continue regular life, but it’s very difficult.”

In a large part of the south – a 40 km radius of Gaza, which includes large cities like Ashkelon and Ashdod – all summer camps and other educational programs have been cancelled, which has had the knock-on effect of making it impossible for many parents to go to work.

Hours before the IDF started Protective Edge, Roni Bernstein, 58, was travelling by train from Tel Aviv to Sderot, in order to make his way home to Kibbutz Magen. As the train came close to the Gaza border, it turned off its lights.

“Anyone in the free world couldn’t imagine that you are on a train and it has to turn its lights off so it’s not fired on by a missile,” he said afterwards, during an interview with The AJN. “It’s crazy.”

Bernstein’s daughter, who also lives on the kibbutz, is feeling the barrage of rockets hard. “She has three-year-old twins and a new baby, and when she puts them to bed at night sits there wondering what she will do if the siren goes off.”

Hamas has declared that Israel’s intensification of operations against its installations crosses a “red line” and threatened to strike Tel Aviv, claiming that the the Israeli authorities are placing residents of central Israel in danger with their actions. However, Israel’s assessment is that it can significantly weaken Hamas’ power.

In one of the most important strikes so far for Israel, early Tuesday the air force destroyed a tunnel that Hamas built in order to access Israel and carry out terror attacks there.

“Terror tunnels like this one demonstrate the constant terror attempts made by Hamas to violate Israel’s sovereignty and carry out complex attacks against Israeli civilians and IDF soldiers,” said IDF spokesman Peter Lerner.

“We are committed in fulfilling our duty with preemptive precision and extensive intelligence in order to safe guard Israelis under threat. Gaza terrorists will not be free to scheme, plot and conspire, they will face the repercussions of their loathsome intentions.”

While support for the IDF operation in Israel’s “rocket region” is high, residents believe that its impact will be limited. “Like the two operations before, it will stop rockets for a period of time, but if I learned from history, we’ll have quiet for a few months or years, and then unless there is a [peace] agreement it will start again,” said Bernstein.

Levi commented: “The operation will only be for some weeks and after that, God bless us. You cannot solve the problem.”