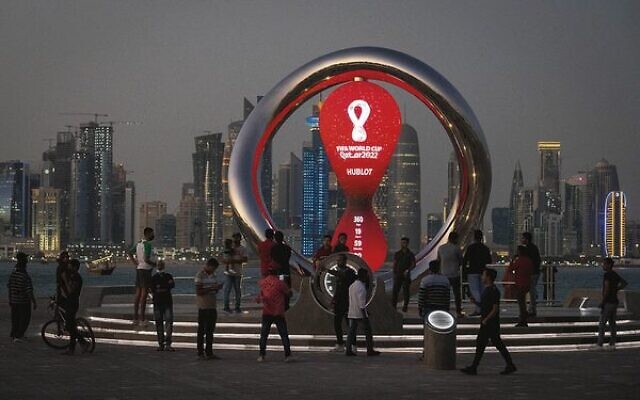 Direct contact is underway between Israel and Qatar so that Israeli fans attending the World Cup in November will be able to receive consular assistance, it was reported last Wednesday.

Earlier this year, Israel announced it had reached a deal with world soccer body FIFA whereby Israeli soccer fans will be able to travel to Qatar for the World Cup.

Senior Israeli officials recently visited Qatar for talks to coordinate ahead of the soccer tournament, according to the Kan public broadcaster.

Israel was said to hope to open an interests office in the country, but Doha reportedly rebuffed the proposal. Qatar hosted an Israeli trade office from 1995 to 2000, but is seen as unlikely to join other Gulf states in establishing full ties with Israel due to its own relationship to Iran.

The report said talks on coordination for the tournament are ongoing, despite the two nations having no formal diplomatic relations.

According to Kan, Qatar has asked Israel that Palestinians also be allowed to travel to the tournament, with the Gulf nation hoping to use its high profile due to the sporting event to allow it to work for a potential agreement between Israel and the Palestinians.

There has still been no formal announcement on security concerns surrounding Israelis travelling to Qatar, a nation with strong ties to both the West, as well as to Iran and the Hamas terror group.

In April, Israeli media reports indicated that the National Security Council was considering warning citizens against attending the World Cup amid fears that they could be targets for Iran or its proxies.

However, in a June announcement, Israel said its citizens – who ordinarily can only enter Qatar on a foreign passport – will be able to freely travel and attend games there during the upcoming tournament.

Under the terms of the deal reached with FIFA, soccer’s international governing body, Israelis seeking to attend must first purchase a ticket to a game, then apply online for a Fan ID card, approval of which grants its holder entry to Qatar and enables them to book accommodation.

Efforts are also being made to facilitate direct flights from Israel to the tiny Gulf nation, it was said in June; however, there has been no public announcement on the matter since then.

Pressure on sporting tournaments has helped push new diplomatic horizons for Israel in the Gulf. In 2018, two years before agreeing to establish ties with Israel, the United Arab Emirates began allowing the Israeli flag to be shown and anthem to be heard during sporting events, ending a longstanding policy it shared with most other Gulf states.

The Israel Hayom daily reported in May that more than 15,000 Israelis had already purchased tickets for the 2022 World Cup. Security is expected to be particularly high around the event, with more than a million avid soccer fans from around the world slated to flood the Gulf nation for the games.

Qatar has said that it will only allow foreigners holding match tickets to enter during the tournament.