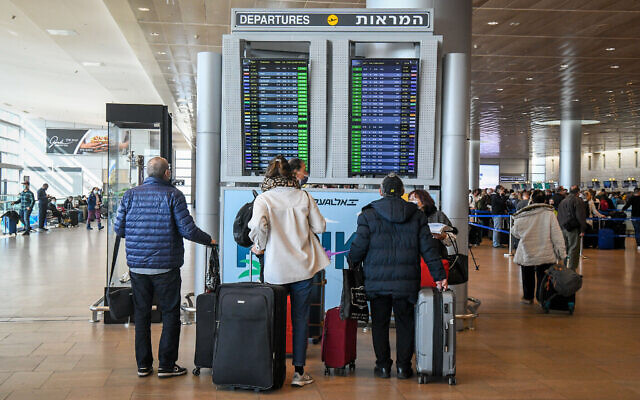 ISRAEL was due to end restrictions on international travel on Friday, director-general Nachman Ash said, as coronavirus rates in the country spiked to record levels, making the impact of the travel bans negligible.

All countries were to be removed from a so-called red list starting at midnight, reopening the skies to dozens of destinations where travel had been severely curtailed in bid to slow the Omicron variant from infiltrating the country.

In recent days, coronavirus case numbers in Israel have soared past 10,000 a day, and officials now view the travel ban, credited with giving Israel time to prepare for the larger outbreak, as obsolete.

Ash explained that data shows less than five percent of the 72,000 active coronavirus cases in the country came from abroad, the Kan public broadcaster reported.

“We still recommend avoiding unnecessary flights. Morbidity is high worldwide and these transitions are a risk factor for infection,” Ash said at a press briefing.

At the end of November, Israel closed its borders to foreign nationals in an attempt to hold off the Omicron variant and drew up a list of countries with high COVID morbidity that Israelis were prohibited to visit. At one point 70 countries were added to the red list, including the United States, Turkey, and most of Europe and Africa.

The list had been slated to be whittled down considerably starting January 9, though the US and Britain would have still remained on it.

It was unclear how Ash’s directive would affect unvaccinated travellers. On Monday, the cabinet said foreign travellers who have not been vaccinated or recovered will still not be permitted to enter Israel, regardless of origin.

Israel had only reopened to foreign tourism in early November, for the first time since the start of the pandemic in early 2020.