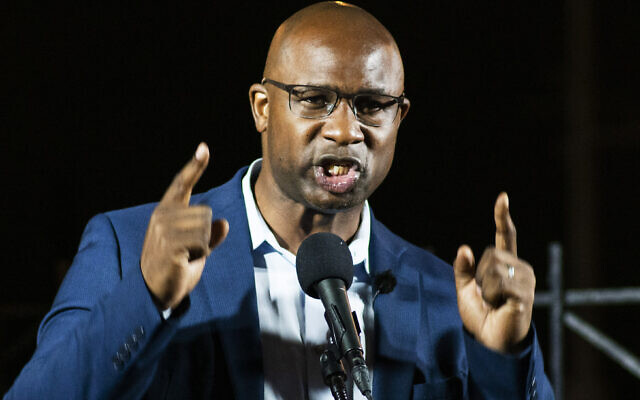 LET’S try an experiment. Let’s imagine that Israelis used their experience of the Israeli-Palestinian conflict to understand American civil rights issues. Why, Israelis would ask, do African Americans continue to suffer systemic discrimination? For many Israelis, who understand the Palestinian predicament in the West Bank and Gaza as an unfortunate consequence of decades of Palestinian rejectionism and terrorism, the answer would be clear: African Americans are discriminated against because they pose a security risk to ordinary Americans.

Absurd, right? And yet, across the United States, this scenario’s very inverse is occurring, whereby the American civil rights story is being used as the lens through which to understand the Israeli-Palestinian conflict.

“What they are doing to the Palestinian people is what they continue to do to our Black brothers and sisters here,” Congresswoman Rashida Tlaib roared to an ecstatic crowd earlier in May.

Freshman Democratic Representative Jamaal Bowman, too, recently asserted that being “a Black man in America … informs my view of what’s happening right now in Israel and Palestine”.

Throughout the United States, phrases such as “From Ferguson to Palestine” and “Palestinian Lives Matter” have become increasingly commonplace among progressives when discussing the Israeli-Palestinian conflict, in an overt attempt to bond the two peoples in their struggle against oppression.

But rather than inform us about the world’s most intractable conflict, these new catchphrases serve to teach us far more about those who use them. Through ruling that the American civil rights story – their story – is the sole lens through which the Israeli-Palestinian conflict can be understood, progressives have rebuked any honest understanding of what for decades has confounded experts. But more than that, they have committed what author and former member of Knesset Einat Wilf aptly labels “an act of blatant neocolonialism”. She explains, “Blithely ignorant of the specificity of their own experience, the neocolonialists fit the square peg of the conflict into the round hole of American history.”

How else does one explain portrayals of Israeli Jews as “white” and benefactors of “white privilege”, when approximately half are of Arabic descent; many of whom were forced by Arab mobs to flee the countries they’d been living in for centuries? Or the accompanying portrayal of Palestinians as “brown” or “people of colour”? Or the depiction of Palestinians – just like African Americans – as passive victims of oppression, without any sincere acknowledgement of the decades of Palestinian terrorism that has left many Israelis – be they Muslim, Druze, Christian, Baha’i or Jewish – traumatised?

And yet, reading civil rights advocate Michelle Alexander’s 2019 New York Times essay, which likened Israel’s treatment of Palestinians to “Jim Crow segregation”, and labelled it “one of the great moral challenges of our time”, one may indeed conclude that George Floyd’s murder is in fact linked to Palestinian suffering. That would certainly explain the forces behind what The Atlantic‘s Yasmeen Serhan recently called “a progressive push to focus on human rights” vis-a-vis the conflict.

Yet this could not be further from the truth. These characterisations are a gross detachment from reality, or rather, they represent the act of forcing America’s reality onto a region where many Americans have not, and never will, visit. Just as the American Weltanschauung assumed its universalist liberal values would be adopted wholesale in Beirut, Baghdad and Kabul – if it works for us, they’ll love it too – so too has it now arrived in Jerusalem, Gaza City and Ramallah, in an attempt – naive at best, malicious at worst – to export American insecurities onto the other side of the globe.

I’m not trying to absolve Israel of any wrongdoing. Israel, like all countries, is deeply flawed. But, just as the Indian-Pakistani Kashmir border dispute has its own story, just as Brexit had its unique set of influences, and just as Syria’s civil war has a myriad factors at play that are incomparable to other wars, so too is the Israeli-Palestinian conflict an issue in its own right. It cannot be understood through the lens of any experience other than that of Israelis and Palestinians.

So don’t be fooled. This ostensible ‘criticism’ of Israeli policy is anything but. It is a misguided attempt to frame a foreign conflict in the simplest of terms. After all, if Israelis are indeed white, and Palestinians brown, and ‘colourism’ is at play, then no further investigation is needed. Israel is the oppressor.

As Matti Friedman recently wrote in an essay for The Atlantic, “the world is not a mirror”, but rather “a kaleidoscope that can be understood only by people who are experts in each individual shard”.

Yet, in their grand act of painting the issue of civil rights over the entire kaleidoscope, progressives have clouded their own vision, pushed themselves further away from reality, and hamstrung their ability to help Palestinians.

Josh Feldman is an active member of the community involved in informal education and Israel advocacy, and was part of the Australian delegation to the 38th World Zionist Congress. Twitter: @joshrfeldman