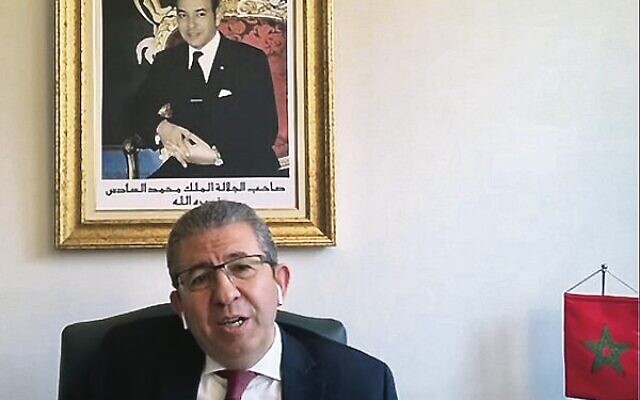 MOROCCO’S re-establishment of diplomatic relations with Israel last December should not be viewed as surprising, but rather a decision that “came naturally, with clarity and conviction,” Morocco’s Ambassador to Australia Karim Medrek said last week.

Addressing a webinar hosted by the Australia/Israel & Jewish Affairs Council (AIJAC), Medrek said while the main “visionary and architect” of the restored ties was King Mohammed VI, it was Morocco’s longstanding embracement of valuing diversity and co-existence, combined with warmly embracing more than 2000 years of its own Jewish heritage, that provided the foundation.

“Let us not be surprised … because the strong feeling of attachment of the Moroccan community of the Jewish faith, with its country of origin … and our people-to-people connections … had never been broken, and we are so proud of this part of our identity.”

He stressed that Morocco is uniquely placed within the Arab and Muslim world for recognising in its constitution “the Abrahamic influence in Morocco’s identity,” for introducing a compulsory secondary school course about Moroccan Jewish history, and for providing government funding to restore hundreds of synagogues, Jewish cemeteries and museums.

Medrek said he hoped his country’s restored relations with Israel will “give an impetus among others to favour dialogue and respect,” adding that in his view “cooperation between the Jewish and Muslim communities in Morocco should be made more visible”.

On economic prospects, Medrek revealed four bilateral agreements have already been signed by both nations on matters ranging from direct flights to water management, and Israeli companies have exported about $26.5 million worth of items to Morocco in the first nine months of this year.

With Morocco being a major producer of cars, textiles and fertilisers, Medrek felt those sectors “have strong potential for exports to Israel, or through Israel, to other regions in the world, like Australia and New Zealand”.

“And the Israeli private sector should consider Morocco as a gateway to the African continent and benefit from Moroccan know-how in the region.”

Noting how Morocco and Australia are celebrating 45 years of diplomatic relations with each other, Medrek said that despite the tyranny of geographical distance, “we share many common values which help us work very closely in many international forums”.

On Iran, Medrek lamented that Tehran’s current perspective for the Middle East “doesn’t meet the spirit of compromise”.

“The region is in need of a new paradigm … and states should be more responsible and avoid any initiative that undermines peace.”