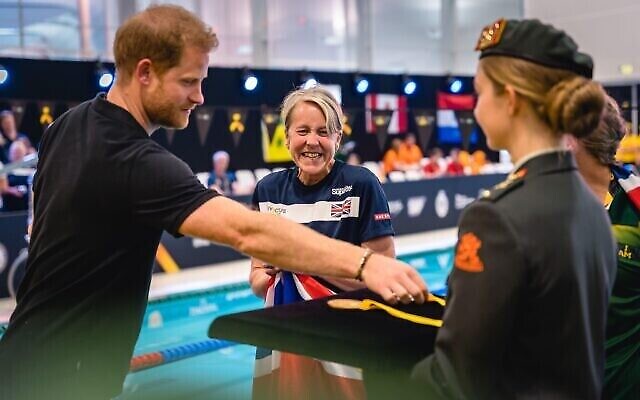 The Duke of Sussex with a British competitor during the swimming at the Invictus Games at Het Hofbad the Hague, Netherlands. Photo: Jewish News UK

Israel will compete in next year’s Invictus Games, the sporting event for wounded and sick soldiers that was founded by Prince Harry eight years ago.

The announcement means active and veteran service personnel from the Israel Defence Forces will compete at the 2023 games, which will be held in September in the German city of Dusseldorf.

Colombia and Nigeria were also confirmed to have joined the wider Invictus Community of Nations on Tuesday, bringing the total number of participating countries to 23.

“Israel has a long standing respect for the power of sport in recovery, and I’m pleased they are joining our wider community this year, said Dominic Reid, chief executive of the foundation that organises the games.

“As next year’s Invictus Games hosts are building ‘a Home for Respect’ in Germany, I am also looking forward to Israel and Colombia joining us in Dusseldorf next September.”

The IDF said it was “pleased and proud” to take part.

Prince Harry, the Duke of Sussex, remains a patron of the organisation.

This week’s decision comes amid a reorganisation of the Invictus Games that will allow service personnel will be able to take part in a wider programme of activities all year round.

London hosted the first games in 2014 and subsequent events have been held in the United States, Canada and Australia.

The most recent Invictus Games were held in The Netherlands in April.

Edan Kleiman, chairman of the IDF Disabled Veterans Organisation, said: “Wounded Israeli servicemen and women, who are shining examples of perseverance in rehabilitation and excellence in sports, will continue to honourably represent Israel at the Invictus Games.

“We witness daily the important role that sport plays in strengthening not only the body but the spirit, enabling people to regain their lives. No less important is the wonderful opportunity to bring together wounded war veterans from other countries to form life long bonds of camaraderie.”