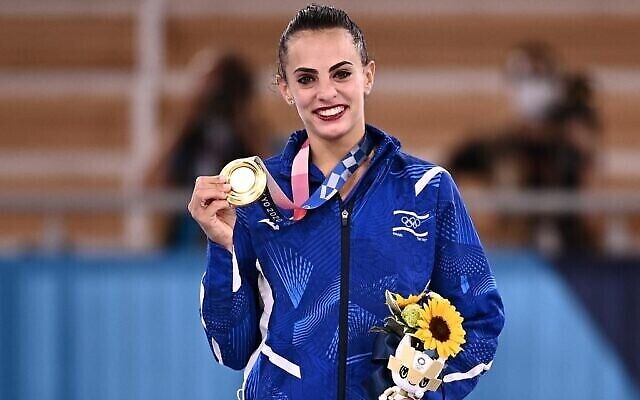 Rhythmic gymnast Linoy Ashram won Israel’s third-ever Olympic gold medal on Saturday, beating out tough competition to take the top spot on the Tokyo 2020 podium and ending over two decades of Russian dominance in the sport.

Ashram is the first Israeli woman to win a gold at the Olympics.

“It’s what I dreamed of for all my life,” Ashram said after the win.

“It’s an amazing feeling to stand in this place, at this time, on the podium and in first place,” said the 22-year-old gymnast who has now been picked to carry the flag at the closing ceremony.

“It’s a crazy experience that I still haven’t fully digested and with peak levels of excitement,” Ashram said.

She was visible moved as Israel’s national anthem, Hatikva, rang out through the gymnastics centre as the flag was raised.

As well as the two golds, Israel’s Olympic team had already picked up two bronze medals in Tokyo for the judo mixed team and Avishag Semberg for taekwondo in the women’s 49kg category.

The Tokyo games are thus Israel’s most successful, since it has never previously won more than two medals at any one Olympics.