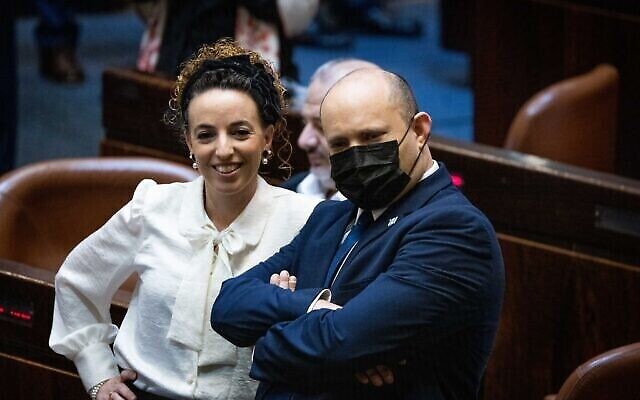 Plunging the government into crisis, coalition whip Idit Silman announced Wednesday that she is quitting and will instead work to form a new, right-wing government without a resort to new elections.

Silman’s announcement, which she said was due to the “harming” of Jewish identity in Israel, means that the coalition no longer has a majority.

“I will not abet the harming of the Jewish identity of the State of Israel and the people of Israel. I will continue to try to persuade my friends to return home and form a right-wing government,” she said in a statement. “I know I am not the only one who feels this way. Another government can be formed in this Knesset.”

According to reports, Silman did not tell Prime Minister Naftali Bennett — head of the Yamina party of which she is a member — of the move in advance, leaving the premier to learn through media reports that he had lost his government majority.

Reports said that Bennett’s planned schedule for Wednesday was scrapped as he huddled with advisers.

Silman’s announcement means the government will only be able to pass legislation with support from opposition lawmakers. The only party that would perhaps provide it with votes for some legislation would be the Joint List of Arab factions, but its support would only serve to further alienate coalition parties on the right.

According to reports, she is set to join Likud in the opposition, giving Benjamin Netanyahu’s party two main potential paths to return to power.

The first option would be for it to pass a law to dissolve the Knesset. To pass, this would require the support of at least 61 of the 120 members of Knesset.

The bill would therefore necessitate the widespread backing of the current opposition, including members of the six-strong Joint List of Arab lawmakers, and the support of some lawmakers not currently in the opposition, for example Silman and rebel Yamina MK Amichai Shikli.

With the Knesset in recess, scheduling a vote on such a bill is thought to be unlikely before the weeklong Passover festival which begins at the end of next week, but could be arranged soon after that.

(If such a bill were to pass, Foreign Minister Yair Lapid would be automatically appointed prime minister for the transition period through new elections and the establishment and swearing-in of a new government.) 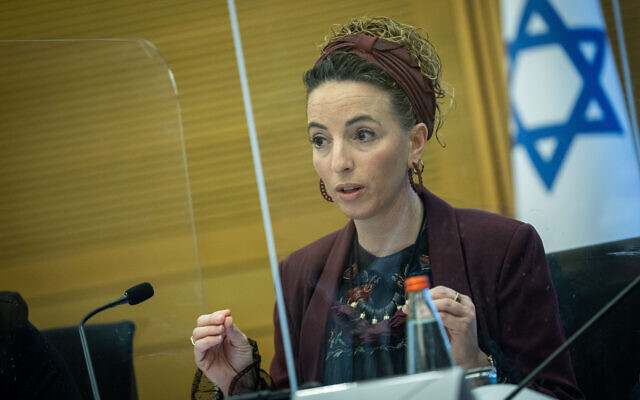 The second option would be for Likud to form an alternative government in the current 24th Knesset, although it appears it would struggle to do so — Likud has 29 seats, Religious Zionism has seven, Shas has nine and United Torah Judaism has seven — a total of 52.

Even if Yamina were to split apart, and Silman and Shikli were able to convince other defectors to join them, such as Interior Minister Ayelet Shaked and MK Nir Orbach, that would only take a Likud-led bloc to 56 seats out of the 120-member Knesset. It would still need further support from within the current coalition ranks, such as, potentially, disaffected members of Benny Gantz’s eight-strong Blue and White party.

Netanyahu was quick to congratulate Silman for what he termed a “courageous move.”

“I was very moved to hear MK Idit Silman’s statement, and I congratulate her on behalf of the masses of the people of Israel who yearned for this moment,” Netanyahu said in a video statement.

“I call on all those elected by the national camp to join Idit and come home, you will be received with complete respect and with open arms,” Netanyahu said.

Likud ran a scathing, months-long online campaign against Yamina joining the government and ousting Netanyahu, and Silman was a key target.

The lawmaker was frequently harassed, and she said she was physically attacked at a gas station; at the time, Netanyahu suggested that Silman could have made up the story of the assault in order to tar opponents of the coalition.

Leader of the Opposition and head of the Likud party Benjamin Netanyahu. Photo: Yonatahn Sindel/Flash90

Religious Services Minister Matan Kahana responded to Wednesday’s announcement in a radio interview, saying that he hoped Silman would change her mind.

“I found out about it right now. I hope it is reversible. This government is doing good things for the people; it was formed because of a political exigency, but I think it is very worthwhile for it to continue to function,” the Yamina lawmaker said.

Far-right MK Bezalel Smotrich, head of the opposition Religious Zionism party, previously a political partner of Bennett who is now a vocal opponent of the government, said that Silman had taken a “courageous step.”

“The national camp will receive Idit with open arms and in a place of honor reserved for those who saved the people of Israel,” Smotrich said in a statement.

“I call on the members of the coalition who were elected by the right to come home. Together, a Jewish, Zionist and national government will be built that will do a lot of good for the State of Israel,” he said. 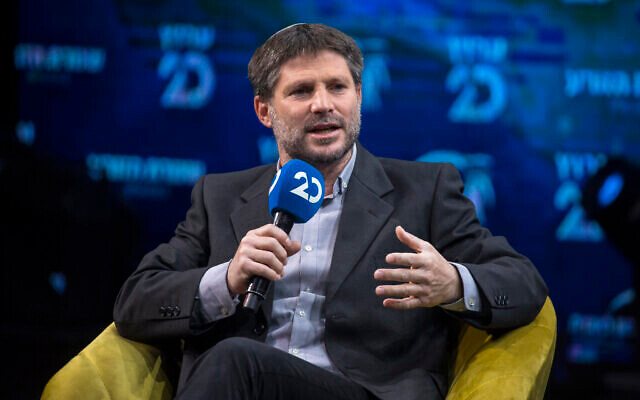 Head of the Tkuma party MK Bezalel Smotrich speaks at the annual Jerusalem Conference of the Channel 20 in Jerusalem, on March 16, 2021. Photo: Olivier Fitoussi/Flash90

Silman’s move came as the coalition was already struggling with the day-to-day business of the Knesset due to the fact that it had only a razor-thin majority.

Another Yamina MK, Amichai Shikli, is already an outspoken critic of the government who tends to vote with the opposition.

Yamina could now declare Silman and Shikli to be dissenting lawmakers and oust them from the party. That would mean they would be barred from running in the next election under any party that is currently part of the Knesset.

An alternative would be for Silman and Shikli to form a new faction, but they would not be able to do it alone and would need one more Yamina Knesset member to make the move.

Interior Minister Ayelet Shaked, also of the Yamina party, has had a fractious relationship with many of her coalition partners and is seen as a potential defector.

Other possibilities are Yamina MK Nir Orbach, who is chairman of the Knesset’s House Committee and has frequently clashed with left-wing coalition partners, and Yamina MK Abir Kara, a deputy minister in the Prime Minister’s Office.

Silman has recently been very vocal regarding issues of religion and state in Israel.

Earlier this week, she clashed with Health Minister Nitzan Horowitz, leader of the left-wing Meretz party, attacking him for ordering hospitals to allow patients and visitors to bring hametz, or non-kosher-for-Passover food, onto their premises during the upcoming Passover holiday — though the minister was only instructing institutions to abide by a top court ruling on the matter.

Silman demanded that Horowitz release guidelines on the matter, warning that his actions were “crossing the red line” and that he should be fired.

Last week she came out firmly against the so-called Western Wall compromise, a deal that would grant additional freedoms to non-Orthodox streams of Judaism at the Jerusalem holy site.

“There’s a status quo with the Western Wall that I don’t think is going to change. All of the attention around this is just demagoguery. This is a house of prayer. There’s a minority — a Reform minority — that is making a lot of noise as though it’s the majority. We need to say the truth: That’s not the case,” Silman said in an interview with the Kan public broadcaster. “This government and certainly we — or at least I — need to preserve the Orthodox character of the Western Wall.”

Since the government was formed, there have been multiple reports of attempts by the opposition to poach coalition lawmakers and topple the government.

Silman’s announcement comes amid growing tensions within the coalition, which last year united parties from the left to the pro-settlement right, along with the Islamist Ra’am, in order to dethrone Netanyahu and his Likud faction after a series of inconclusive elections that paralyzed the Knesset for two years.