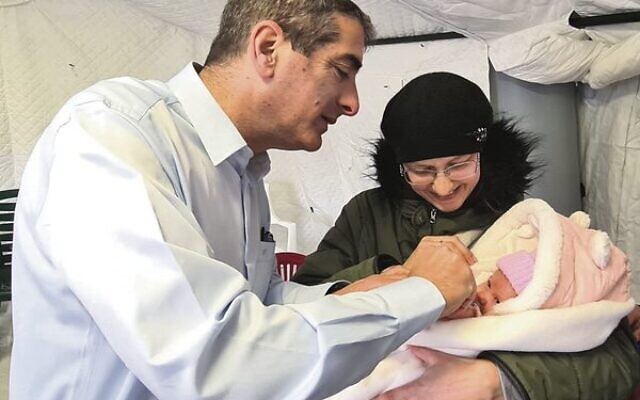 Professor Yitshak Kreiss with a baby at Israel's field hospital in Ukraine.

Since taking up his role at Sheba in Tel Hashomer in 2016, Kreiss has led its transformation along the lines of a “City of Health” concept, which re-imagines medical centres as hubs for patient care, medical innovation and research.

Sheba is now a 2000-bed facility with 10,000 employees, offering treatment and rehabilitation in areas as diverse as acute cancer treatment, obstetrics and gynaecology, and geriatric care. During 2020-21, Sheba became Israel’s leading COVID treatment hub, with serology research and data management guiding Israel’s pathway through the pandemic, which drew global attention.

Leveraging his IDF expertise in disaster relief, Kreiss has overseen the expansion of Sheba’s humanitarian work in war zones such as Ukraine and natural disaster areas in the Philippines, Japan and Nepal.

Closer to Australia, Sheba has treated eye disease in Papua New Guinea and a 2019 measles outbreak in Samoa.

“Israel is a startup nation, and if you combine that with Sheba’s City of Health model, you have the infrastructure, the chutzpah, the ecosystem to change the future of medicine,” Kreiss told The AJN.

Kreiss described Sheba’s ARC (Accelerate, Redesign, Collaborate) platform as “the way we generate ideas, devices, medications, diagnostics that we believe can change the future of medicine”. Sheba measures its success with ARC through more than 100 partner companies and more than 200 research patents. “We’re a system that brings innovation from within and opens to innovation from outside.”

During his Australian visit, Kreiss will strengthen ties with Victorian health facilities, including Melbourne’s Peter Mac and Sydney’s Westmead, introducing them to the ARC concept.

Sheba works with Palestinians from the West Bank and Gaza, and with Bahrain, UAE and Morocco.

In 2013, during the Syrian civil war, children were treated at Sheba, changing perceptions of families towards Israel. “If you save a child’s life, its parents cannot hate you anymore,” reflected Kreiss. “They can have a political argument with you, they can have conflicts with you. They don’t have to love you, but the antisemitic hate is eliminated.”

Professor Yitshak Kreiss will be in Australia November 11-20 for a series of private meetings.