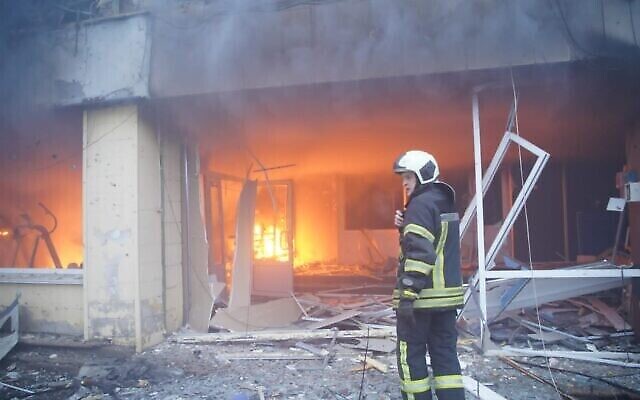 Ukrainian firefighters work to put out a blaze in a building in the Jewish cemetery located in Kyiv's Babi Yar Holocaust memorial site, on March 1, 2022. Photo: State Emergency Service of Ukraine

“As we view images emerging from Ukraine showing innocent civilians fleeing from their endangered homes and pictures of the deadly Russian attack on the vicinity of the Babi Yar Holocaust memorial site, Yad Vashem voices its vehement condemnation,” the Israeli Holocaust museum said in a statement.

The Russian airstrike appeared to have targeted Kyiv’s main television tower, which is directly adjacent to the Babi Yar memorial. The Russian attack knocked out some state broadcasting, but left the tower intact.

At least five people were killed and five more were injured in the missile strike, the Ukrainian emergencies service said. Images from the scene showed charred bodies and cars damaged in the apparent Russian attack.

At least one missile struck a crop of buildings in a Jewish cemetery located in the Babi Yar complex. The missile strike sparked a fire in the building, which local firemen were called to extinguish. There did not appear to be any direct damage to the Babi Yar monument itself, a spokesperson for the site told The Times of Israel.

Photographs and video footage from the Babi Yar complex, which were shared by Ukrainian emergency services, showed the extensive damage to buildings and the surrounding area.

The attack sparked a flurry of outrage and denunciations from Israel and international Jewish organisations.

Foreign Minister Yair Lapid said Israel would help fix whatever damage was caused to the site. In a statement, Lapid said Israel “denounced the damage” to the Babi Yar memorial and the Jewish cemetery, but pointedly refrained from identifying Russia as having caused it. “We call for the sacred site to be protected and honored,” Lapid said.

“At the instruction of Foreign Minister Lapid, the ambassador to Kyiv is in contact with the managers of the site and, when it is possible, we will help fix the damage,” the Foreign Ministry said.

Diaspora Affairs Minister Nachman Shai also refrained from blaming Russia for the attack, saying only that he was “saddened by this unnecessary war, by injury to innocent civilians, and damage to civilian installations, including Jewish sites such as the important Babi Yar Holocaust memorial center.”

Yad Vashem, which used notably softer language in its initial comments on the Russian invasion of Ukraine the day before, was far harsher and more pointed in its statement on Tuesday. It did explicitly blame Moscow for the strike, describing it as a “deadly Russian attack. 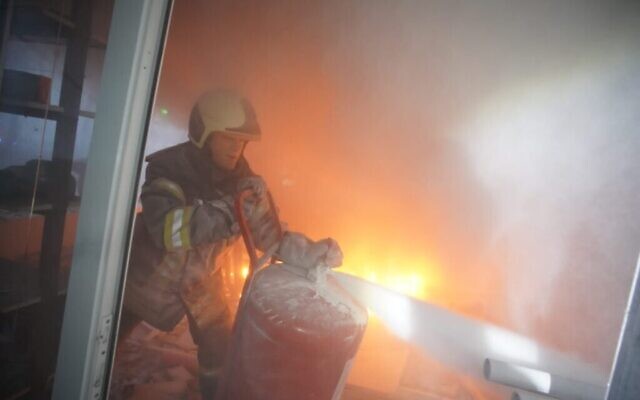 Ukrainian firefighters work to put out a blaze in a building in the Jewish cemetery located in Kyiv’s Babi Yar Holocaust memorial site, on March 1, 2022. Photo: State Emergency Service of Ukraine

“We continue to follow with grave concern the outrageous acts of aggression being perpetrated against civilian targets in Ukraine,” the museum said in a statement.

“We call on the international community to take concerted measures to safeguard civilian lives as well as these historical sites because of their irreplaceable value for research, education and commemoration of the Holocaust. Rather than being subjected to blatant violence, sacred sites like Babi Yar must be protected,” it said, adding: “Of course, the security and wellbeing of civilians must be universally and absolutely respected.”

The Babi Yar memorial sits atop a mass grave containing some 34,000 Jews who were slaughtered there over a two-day period in 1941.

“This was done as part of the ideology of genocide perpetrated by the German Nazis and their collaborators. History must be remembered accurately and its moral lessons must be implemented truthfully by all,” Yad Vashem said.

Natan Sharansky, the chairman of the Babi Yar Holocaust Memorial Center and former head of the Jewish Agency, said in a statement: “[Russian President Vladimir] Putin seeking to distort and manipulate the Holocaust to justify an illegal invasion of a sovereign democratic country is utterly abhorrent. It is symbolic that he starts attacking Kyiv by bombing the site of Babi Yar, the biggest of Nazi massacres.” 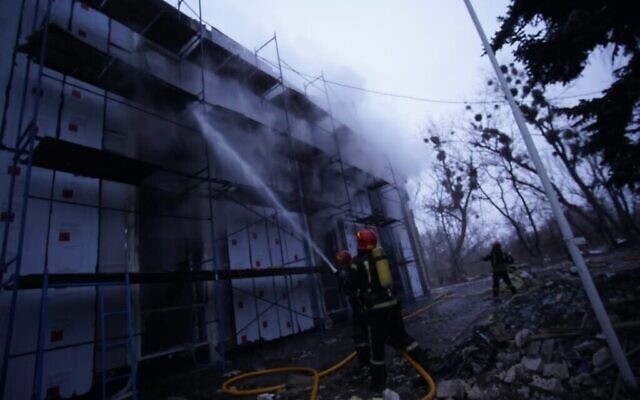 Ukrainian firefighters work to put out a blaze in a building in the Jewish cemetery located in Kyiv’s Babi Yar Holocaust memorial site, on March 1, 2022. Photo: State Emergency Service of Ukraine

Sharansky was referring to claims by Putin ahead of the Russian invasion of Ukraine that he was doing so, in part, to “denazify” the country, which has a democratically elected Jewish president.

“We, at the Babi Yar Holocaust Memorial Center, built on Europe’s largest mass grave of the Holocaust, work to preserve historical memory following decades of Soviet suppression of historical truth, so that the evils of the past can never be repeated. We must not allow the truth to — once again — become the victim of war,” said Sharansky, who was born in Ukraine.

Earlier in the day, prior to the airstrike, the Babi Yar Holocaust Memorial Center also issued a statement, heavily criticizing Putin and the invasion and calling for him to be investigated by the International Criminal Court for war crimes.

The American National Jewish Women’s Council called the strike that hit Babi Yar “unconscionable” and said it “only underscores the false pretenses of ‘denazification’ to justify Russia’s attack on Ukraine.”

The organisation added: “We condemn these Russian attacks in the strongest possible terms.”

The Jewish Federations of North America also denounced the Russian attack, noting that among the Ukrainian citizens affected by the invasion “are Holocaust survivors who have lived through the horror of war before.”

Ukrainian President Volodymyr Zelensky, who is Jewish and had family members die in the Holocaust, also sharply criticized the damage to Babi Yar and tacitly compared the Russians to the Nazis.

To the world: what is the point of saying «never again» for 80 years, if the world stays silent when a bomb drops on the same site of Babyn Yar? At least 5 killed. History repeating…

In a phone call with Zelensky, US President Joe Biden discussed Russia’s escalation of attacks, including the attack at Babi Yar, according to a White House readout. Biden offered the “United States’ continued backing for Ukraine as it defends itself against Russian aggression,” the readout said.

The strike followed the Russian defense ministry’s warning that Russian troops would carry out an attack on what they said was the infrastructure of Ukraine’s intelligence services in Kyiv and urged residents living nearby to leave.

“We call on… Kyiv residents living near relay nodes to leave their homes,” Konashenkov added. 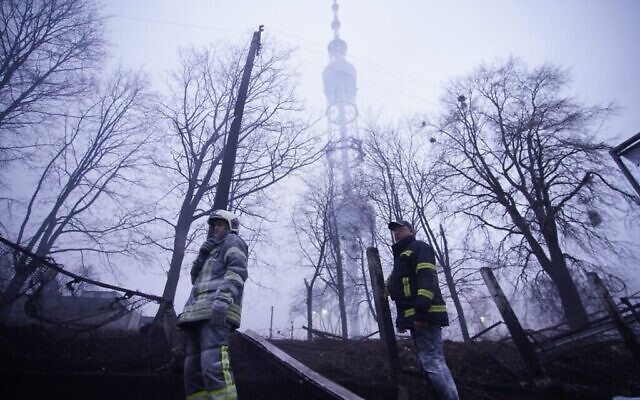 The statement came as Russian troops ramped up efforts to take Kyiv, with a 40-mile convoy of hundreds of Russian tanks and other vehicles advancing on the capital in what the West feared was a bid to topple Ukraine’s government and install a Kremlin-friendly regime.

Ukrainian authorities have accused the Russian army of carrying out strikes on residential areas in several cities, including the country’s second-biggest city of Kharkiv, where fierce fighting is taking place.

Ukraine says up to 350 civilians have been killed since Russia invaded.

The International Criminal Court’s chief prosecutor said earlier this week that he plans to open an investigation into possible war crimes.

The first talks Monday between Ukraine and Russia yielded no stop in the fighting, though the two sides agreed to another meeting in the coming days.

Agencies contributed to this report.