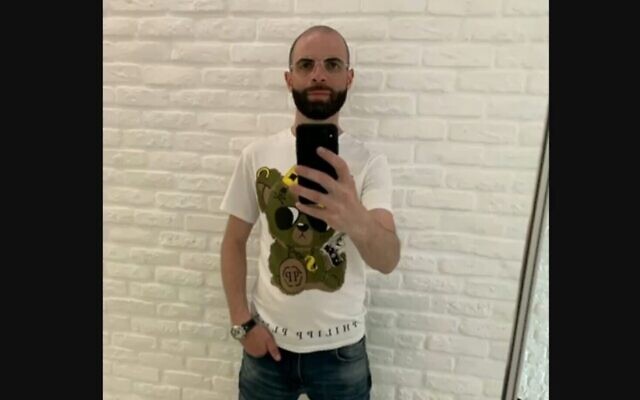 AN Israeli citizen was shot dead as a convoy he was traveling in outside Kyiv came under fire, apparently by Ukrainian troops who mistook him for a Chechen militant.

The man’s family identified him as Roman Brodsky, a father of two and DJ who had been living in Ukraine with his family.

He was the first Israeli citizen reported killed in the Russian onslaught against Ukraine, which Moscow launched last Thursday.

The Foreign Ministry said Brodsky was part of a convoy of vehicles traveling to the Moldovan border to leave the country. He and his partner were intending to then fly to Israel.

According to Brodsky’s father, his son was shot dead at a checkpoint.

“[The Ukrainian soldiers] thought he was Chechen or something and killed him,” his father told the Kan broadcaster.

Despite Ukrainian soldiers shooting Brodsky, his family told the Channel 12 news outlet that they blame the “dictator” Vladimir Putin for his death.

His father told the station that they want help bringing him for burial in Israel, and asked that Israel do more to ensure that people who are still alive can make it safely to the Jewish State.

Brodsky came to Israel at age 13 with his family. He lived in the country for 27 years and had two small children. He returned to Ukraine about 2 years ago to start a business in Kyiv.

The Zaka rescue service gave his age as 37, though some Israeli news outlets identified him as 41 or 42 years old.

“In the name of all Israeli citizens, I want to send my condolences to Roman’s wife, children and family in Israel and in Ukraine. We are doing everything to help Israelis return home,” Bennett said.

The Foreign Ministry said it had informed the man’s wife and child who were still in Ukraine, as well as his parents in Israel. His mother collapsed upon hearing the news and was taken to Ashkelon’s Barzilai Medical Center for care.

Brodsky’s father and stepmother live in the southern city of Arad, while his mother lives in Ashkelon. They were informed of their son’s death by Magen David Adom.

According to the Ukrainian interior ministry, as of Monday, 352 civilians have been killed, 14 of them children, in the Russian offensive, and 1,684 people have been injured, 116 of them minors.

Israel’s Foreign Ministry estimated that several thousand Israeli citizens were still in Ukraine, though many had started making their way to the country’s borders, where Israeli embassy employees were working to get them on flights back to Israel.