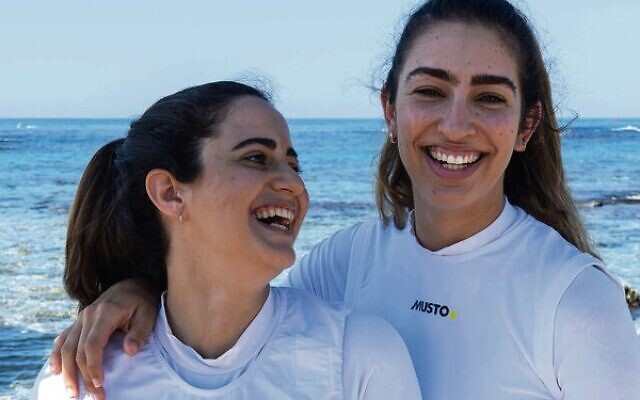 Israeli sailors Noya Bar Am (left) and Saar Tamir are hoping to train in Sydney in early 2023.

Israeli sailing athletes Noya Bar Am and Saar Tamir share a dream of becoming Israel’s first representatives to compete at an Olympic Games in the fastest type of racing boat – the 49er FX.

And they hope to begin their journey to Paris 2024 qualification by relocating to Australia for the first four months of next year, to prepare for the crucial 2023 world championships with an expert Australian coach.

But that all depends on whether they can raise enough money to fund that – and time is ticking.

Speaking to The AJN via Zoom last week, it was easy to notice their passion and commitment to their craft.

Bar Am, 26, added, “Sailing is what we do now, full-time, and we believe that making it to the 2024 Olympics is an achievable goal.

“And we want to be the Israeli pioneers at the Olympics in the 49er FX class, and open the way for the rest of the sailors in Israel [who compete in the 470 class), and inspire them.”

Bar Am made her Olympics debut in Tokyo in the 470 class, coming eighth in the women’s pairs medal race, but at Paris, the 470 class will become a mixed only event.

Unable to find a suitable elite Israeli male sailor to partner with, Bar Am decided to start training with her close friend, Tamir – a 2021 European Championship 470 class gold medallist – in a hired 49er FX boat, and they immediately clicked.

“Nobody in Israel has yet raced in the 49er FX, but it is the future of Olympic sailing, and it is such an amazing, super fast boat,” Bar Am said.

“It’s also a very technical boat, so that’s why we want to learn from the best, in Sydney Harbour with a specialist coach, and then the competitive sailing part will come naturally.

“We’ve heard a lot about the amazing, varied, conditions for sailing training in Sydney.

“But with a limited budget in Israel for the Olympic teams, the funding for sailing is invested only in the 470 format, so we need to fundraise to achieve our dream, which we hope will start its journey in Australia.”

Or to find out more, email Noya at noya1128@gmail.com