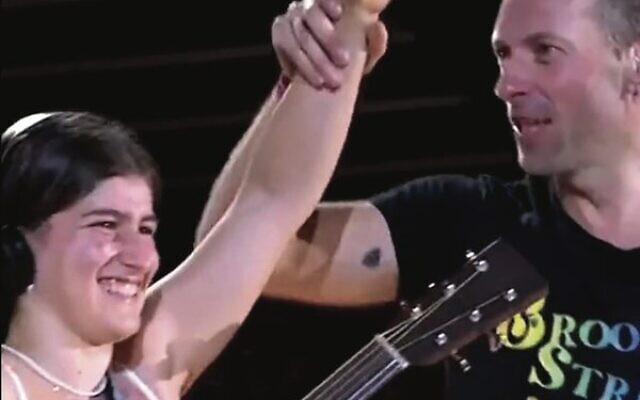 An Israeli teenager was brought on stage by Coldplay’s frontman Chris Martin to play guitar in front of 50,000 fans at a concert in Brussels, Belgium.

The 15-year-old, named only as Gili from Savyon in Hebrew-language media, arrived at the concert last week equipped with a large sign featuring a request to join the band on stage, and amazingly, her dreams were realised.

Martin, spotting the teen’s sign in the audience, invited her on stage, asking the crowd to “please welcome Gili, like a rockstar”.

Gili was greeted on stage with a warm embrace by the global superstar, to the cheers of a packed King Baudouin Stadium.

With her headphones on and guitar in hand, Gili appeared calm and collected as she confidently played Coldplay’s 2002 hit Green Eyes.

After the concert, Gili posted the video on her Instagram with the caption “my wish came true.”

Coldplay also posted an edited version of the video on their social media accounts, which are followed by millions of people.

One comment said, “Gili killed it! It was such an amazing performance.”