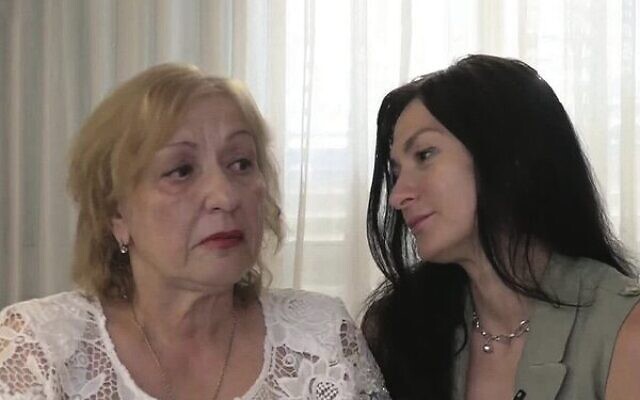 An Israeli woman from Ashdod was reunited with her mother last Tuesday, months after she spotted her on a television report pleading for help while walking through the rubble of the besieged Ukrainian city of Mariupol.

Tatiana Goldin said she knew that her mother Ludmila had managed to escape the city under heavy Russian fire, but that after that, she did not know if she was still alive.

“We can finally let out a sigh of relief, and let out all the stress that lasted several months,” Tatiana told Channel 12 news.

Goldin is an employee of the Ashdod municipality.

According to Channel 13, Ashdod mayor Yehiel Lasri had told Tatiana in the immediate weeks following Russia’s invasion of Ukraine that he would do all he can to help bring her mother to Israel, after being told that she was living alone with no food or medicine in the battered port city.

The Ashdod municipality immediately swung into action to work with various organisations to get Ludmila out of Ukraine and bring her to Israel, the report said.

“There were days of great tension when Ludmila left Mariupol and the situation progressed slowly over the past month until she landed in Israel today,” the Ashdod municipality announced in a statement.

Mariupol was finally taken by Russian forces last month after a devastating three-month siege that left a suspected 20,000 dead and reduced the city to rubble.

The port city, along with the Kyiv suburb of Bucha, has become emblematic of the destruction and suffering of the war.

More than six million people have fled Ukraine and eight million have been internally displaced since the war broke out, according to the United Nations.

Over 28,000 Ukrainians have entered Israel since the start of the war, both Jewish and non-Jewish. Thousands more were already in Israel when the war broke out.

The arrivals stirred up ongoing controversy when they first came to Israel, as the government struggled to agree on the numbers it would allow in and the policies for their time in Israel.