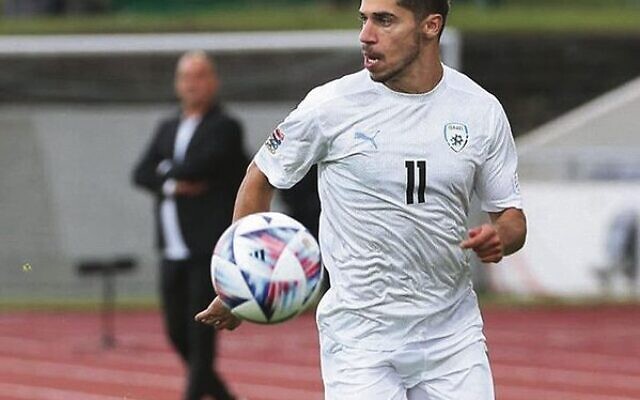 Dor Peretz scored for Israel in their 2-2 draw with Iceland in Reykjavic on June 13.

Alon Hazan is having a positive start to his new role as Israel’s men’s football coach, with the blue and white leading Group F in League B of the 2022 UEFA Nations League, after their first three matches.

Two weeks ago, Israel began their campaign with a gritty 2-2 draw versus Iceland in Haifa.

Israel travelled to Tirana on June 11, when they upset higher-ranked Albania 2-1, through a second half brace by striker Manor Solomon, after the Israelis trailed 0-1 at half-time.

Solomon had been playing club football for Ukrainian team Shakhtar Donetsk until the start of Russia’s invasion, and is now reportedly close to signing a deal with English Premier League club Fulham.

In their third match on June 13, Israel had another 2-2 draw with Iceland, this time in Reykjavik.

Iceland scored early, but then conceded an own goal before half-time, until they scored again in the 60th minute, only for Israel to equalise five minutes later through a header by Dor Peretz.

Israel’s last group game will be on September 25 when they host Albania.

Russia, who would have been in Group F, is banned from participating.