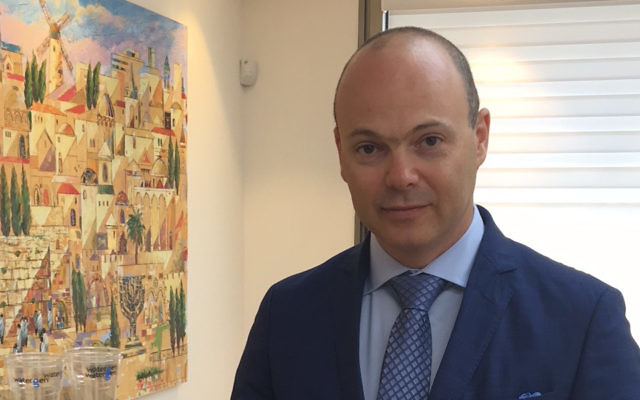 IT certainly produced the “wow” factor – in spades.

One of the largest Israeli business delegations to ever set foot on Australian soil arrived in Sydney on Tuesday ahead of Israeli Prime Minister Benjamin Netanyahu’s historic visit, featuring representatives from 22 companies achieving revolutionary advances in the water, energy and cyber industries.

From Water-Gen’s products that turn air into drinkable water with incredible efficiency, to Eco Wave Power’s pioneering development of commercial-scale power plants using the ocean’s energy, Australian and NSW business and government leaders were able to see firsthand the potential of furthering strong trade and investment links between the two countries.

Other companies represented in the delegation, organised by the Israel Trade Commission with support from the Australia-Israel Chamber of Commerce, included CyberGym, Teva Pharmaceutical Industries, Claroty, Mobilicom and XM Cyber.

Water-Gen chairman Maxim Pasik told The AJN the significance of the two-day event “is really big for ties with Australia, which is a very friendly country to Israel, despite being so far from us”.

“For us, it is important in this trip to meet a big business group in order to create strategic partnerships, because we can’t be [present] everywhere.”

Water-Gen received a standing ovation at a special UN General Assembly session with African leaders last September accompanied by Netanyahu, and there is strong interest for its products in the US, India, Mexico, the Gulf states and South-East Asia.

The company first developed its technology to solve the problem of providing clean water to military troops in remote locations.

But Pasik said Water-Gen’s new range of small (15 litres per day) to industrial scale (3000 litres per day) water generators can operate in any location very efficiently and cheaply, so the company’s focus now is to help provide access to safe drinking water for millions of people in countries with water shortages, as well as during disaster relief operations.

“We saw immediately that with these kinds of products, we can change the world,” Pasik said.

Asked why he thought Israel is such an innovative nation, Pasik said it’s a combination of a science-focused school education system, support by government and industry for start-ups, and a mindset of always trying to find new solutions to problems.