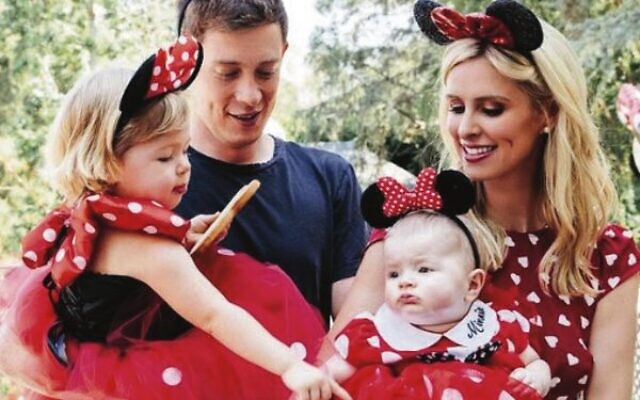 The Rothschilds before their new baby boy was born. Photo: Instagram

After announcing her pregnancy in February, Nicky Hilton, who is married to Jewish banking heir James Rothschild, has given birth to a baby boy, a brother to two “smitten” big sisters.

The heiress in her own right posted a black-and-white photo on Instagram captioning it, “We are officially a party of 5! Welcome to the world sweet boy. Mom, dad and big sisters could not be more smitten.”

The pair wed in 2015 in a lavish ceremony at Kensington Palace in London.

While Rothschild is not strictly considered Jewish, in this late stage of the Rothschilds’ Diaspora history, he still has Jewish roots.

The Rothschild family descends from Mayer Amschel Rothschild, a court Jew to the Landgraves of Hesse-Kassel, in the Free City of Frankfurt, who established his banking business in the 1760s. During the 19th century, when it was at its height, the Rothschild family is believed to have possessed the largest private fortune in modern world history.

The Rothschild Foundation aims to support and strengthen Jewish life in Europe. So while the kids may not be brought up in a Jewish home, they’ll be part of a legacy committed to Jewish causes and values.

We’ll say mazal tov to that!