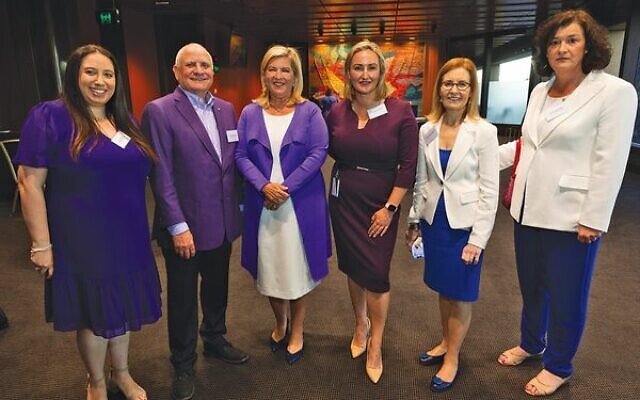 THIS year, in Australia, pancreatic cancer will overtake the major cancers of breast and prostate to become the third most common cause of cancer deaths in the country. Yet, the cancer is often neglected – partly because so few people know where the pancreas is in the body or what it does.

Because of this, most pancreatic cancer cases around the world are often diagnosed at stage III or IV, usually too late for a cure.

The 2022 global World Pancreatic Cancer Day campaign, with the theme ‘It’s About Time’, was once again brought to Australia by local community members – the family of the late Rochelle Goulburn.

Rochelle’s daughter, Jessica Abelsohn, who chairs the World Pancreatic Cancer Day Committee and co-founded local awareness campaign #PurpleOurWorld with her family, said that while it was too late for her mum, the aim of the campaign is to ensure that families have more time together, and that the public know the symptoms of pancreatic cancer.

“There are plenty of awareness campaigns happening around the world, like lighting up buildings – approximately 40 landmarks around Australia are taking part – and a big push on social media to start the very important conversation,” Abelsohn said.

One awareness campaign that the family recently put together was a function at NSW Parliament House sponsored by the Goulburn family’s local member Gabrielle Upton, member for Vaucluse, and Abelsohn’s local member, Dr Marjorie O’Neill, member for Coogee.

The function was well attended by members of Parliament, researchers, clinicians, board members and staff of major Australian pancreatic cancer charities, and people who had lost loved ones to the disease.

O’Neill shared her personal story with pancreatic cancer, explaining her father Brian O’Neill passed away within hours of her election victory in 2019. He had been diagnosed just three months prior.

Taylor was a cancer nurse prior to her election into Parliament and she said that the hardest part about experiencing pancreatic cancer with her dad, was that it was “so quick and so horrible” that she was unable to care for him.

The theme for the night was ‘stories’, and while Abelsohn and her father, Daniel Goulburn, shared Rochelle’s story, one of the highlights was an exclusive video from Eric Idle, founding member of Monty Python, who shared that he is now officially a survivor of pancreatic cancer.

“When mum was diagnosed, the average five-year survival rate was 5.8 per cent. Now, it’s 12 per cent. That’s progress, but we need to work harder.”

Jessica Abelsohn is an employee of The Australian Jewish News.