AS then Israeli prime minister Benjamin Netanyahu made his address at the opening ceremony of the previous Maccabiah Games in 2017 – inside a packed Teddy Stadium in Jerusalem – he reserved a few lines specifically for the 7500 athletes who had travelled to Israel to represent 79 nations across the Diaspora.

“We are all descended from the Maccabees … This is your land too,” Netanyahu said.

“Welcome to your home, welcome to Jerusalem – our eternal capital.”

As he spoke, the 2500 Israeli team members also absorbed the power of his words, with equal pride.

Why is that the case? The answer is simple.

As the head of Australia’s delegation for the 2022 Maccabiah Games, Barry Smorgon, told The AJN after a recent planning trip to Israel hosted by Maccabi World Union (MWU), by harnessing the unifying qualities of sport, the Maccabiah Games “is an absolute win-win situation, in terms of what it does for Israel and for the Jewish Diaspora, including Australia”.

“For a start, it’s good for their economy, to have that influx of 7500 athletes arriving in July, and thousands of team managers and coaches from around the world, and at least another 5000 family members and friends,” he said.

“I mean, you can barely book a hotel room in the Games’ host cities [Jerusalem, Haifa and Netanya] during Maccabiah, the restaurants get packed, and all those sorts of things.

“The Israeli community also gets more involved with each Maccabiah, and the opening ceremony is now broadcast live [on Israel’s biggest television network, Channel 2], so it gets engagement.

“And when you drive around, and you see Maccabiah flags flying everywhere, you feel it.

“But more than all that, I think it’s important for Israelis to actually know that they’ve got such strong Diaspora community support coming to Israel, and it’s crucial for them to see that the Diaspora actually cares.”

On that point, Australian Jewry certainly does care.

Despite many other countries having much larger Jewish populations than ours, Australia has selected 560 athletes to compete at this year’s Games, from 720 nominations.

Smorgon points out that it’s larger than Australia’s team at last year’s Tokyo Olympics, and it means Australia will field the third largest team at the 21st Maccabiah, behind only Israel and the USA.

“That’s quite remarkable, given our Jewish population, our distance [from Israel] and that it’s not cheap to send and have a team there for pre-camp week and the Games itself – the total budget is $7.7 million,” he said.

“Given that was in the middle of a pandemic, given the Maccabiah Games got delayed by one year, given the lockdowns and all their ramifications – that figure [560 Australian athletes] was huge and way beyond our expectations.

“We are fortunate we have such a dedicated, passionate and hard-working management group of volunteers. Clearly, Jewish Australians deem it to be important to want to go, and I think we do it because we want to identify with, and feel connected to, Israel – particularly as we have such a large number of Holocaust survivors and descendants in our community.”

Of course, there are plenty more reasons why Aussies love going to the Maccabiah Games in droves.

While there are more than a dozen members of Australia’s current Maccabiah Games team who could be described as elite athletes – including some who have represented the green and gold in international tournaments and the Commonwealth Games – Smorgon said the bulk of Australia’s delegation will have, through Maccabiah, “an opportunity to represent your country that most of us would not have otherwise”.

“And you get to march, wearing your green and gold uniform, behind the Australian flag at the Maccabiah Games opening ceremony in front of 30,000 cheering people,” he said.

“I can tell you that even though it was my sixth time that I’d marched in the opening ceremony in 2017 – the first time being as an athlete on my first overseas trip in 1969, and the other times mostly in my capacity as chair or president of Maccabi Australia – every single time, you get a buzz like never before.

“The feeling is exhilarating – there’s no other word for it – and as I tell every junior athlete I meet, I can guarantee that every one of them will never forget it.”

The Australian team will have a mix of Maccabiah debutants, scores who have been to four or five games, and a handful who are heading into their eighth, and even ninth, Maccabiah Games – such as Jon Pillemer, Sam Parasol and Harry Procel.

“They keep coming back because of the magic of the whole experience – and it’s also why there are a lot of family connections, and a lot of our masters athletes, for example, will have children, and in some cases grandchildren, competing at this year’s Games,” Smorgon said.

Smorgon’s own granddaughter (netball), two of his grandnephews (basketball and tennis) and a grandson-in-law (half-marathon) will be competing in the junior Maccabiah events, based in Haifa, where there will be a huge cultural, social and educational activities hub for them to enjoy between their events.

Fundraising drives, through Maccabi or by participating teams, are in full swing, “in keeping with our desire that no eligible selected athletes should be denied the opportunity to go, for lack of funds,” Smorgon said, adding “there is a transparent process that we go through, to enable monies raised get allocated on a needs basis”.

Other parts of the Maccabiah experience – tailored to Junior, Open and Masters athletes – will include sightseeing excursions, Shabbat dinner in Jerusalem and a visit to the Kotel.

“The feeling is exhilarating – there’s no other word for it – and as I tell every junior athlete I meet, I can guarantee that every one of them will never forget it.”

“Because of its significance and importance, we will continue to commemorate the disaster at every Maccabiah,” Smorgon said.

On that fateful night in 1997 before the opening ceremony in Tel Aviv, when the bridge across the Yarkon River suddenly collapsed, an Israeli volunteer helping the Australian team, Baruch Ben Yigal, dived in to help rescue people, saving the life of Aussie junior table tennis player Jonathan Goldberg.

“Baruch went on to help the Australian delegation as a volunteer at every Maccabiah Games since, becoming an ‘honorary member’ of the Australian team, and he will be again,” Smorgon said.

Tragically, his only son, Amit, was killed in action at the age of 21 while on active duty in the IDF in May 2020. 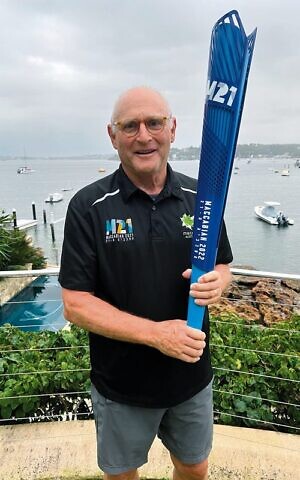 Smorgon – who met Ben Yigal again last month when visiting Israel – said that because Amit “spent a lot of time with our juniors at the 2017 Games, proudly wearing the green and gold, we [Maccabi Australia] decided to make an award, in perpetuity, under Amit’s name”.

“A panel will decide who the recipient will be in Australia’s junior team at the 21st Maccabiah, based on their leadership qualities and how they’ve conducted themselves, being a true mensch,” he said.

“And we’re hoping that MWU will enable us to have Baruch present the inaugural award, as an official part of the closing ceremony.”

The Australian team – comprised of 153 junior and youth athletes, 193 open category athletes and 133 masters – will compete in 20 sports, and will no doubt aim to do as well as it did in 2017.

At those Maccabiah Games, Australia won 154 medals, including 34 golds, to place third overall in terms of total medals won.

“Australia always punches well above our weight at the Maccabiah Games – winning more medals than most of the other countries,” Smorgon said, adding, “and we also punch above our weight when it comes to our role in the operations of MWU.

“For instance, we’ve got Tom Goldman as its senior vice president, Harry Purcell on its international sports commission and Lisa Borowick on its finance committee.

“And during the MWU’s last plenum, Maccabi Australia’s president Jeff Sher made a presentation about our Maccabi Life health and well-being initiative, and now all the other English-speaking country members of MWU want access to it.”

Smorgon said one positive from the long, five-year gap since the last Maccabiah has been “the pent-up anticipation and excitement that has been building, particularly by our youngest athletes”.

“At the end of May, we’ll have a weekend workshop in Victoria in which all 83 coaches and team managers in the Australian delegation will be meeting together for the first time, which will really be a galvanising moment,” he said.

“And then there will be a replica Maccabiah Torch relay in Australia – visiting communal venues and schools – and finally, Australian team farewell receptions in Melbourne and Sydney.”

The 2022 Games will include new sports such as indoor climbing and 3×3 basketball, an improved and more responsive MWU-run management system based in each host city, more live streaming feeds available for fans via Maccabi Australia, a one-stop information app for each athlete and top-notch sport and training facilities.

“There’s a new cycling velodrome that opened just months ago, the athletics track has been completely resurfaced, the Wingate Institute of Sport has a world-class swimming complex, and there’s several new tennis courts and football pitches,” Smorgon said.

“The sport venues are certainly going to be better than teams and athletes have experienced before. So, while the total number of athletes from around the world may not necessarily be bigger than in 2017, mainly due to the pandemic, I think, unquestionably, the upcoming Maccabiah Games will be the best yet.”

Meanwhile, for Australian team members and supporters who visit Tel Aviv after the Games, it may be worth a visit to the Pierre Gildesgame Maccabi Museum, which has just moved into MWU’s new premises within Kfar Maccabiah in Ramat Gan.

The top level in the three-storey museum is dedicated to the Maccabiah Games, and Maccabi Australia has supplied a lot of material for an interactive electronic display, which will officially open during the Maccabiah.

For more information about the Maccabiah Games, visit maccabiupdates.com/m21 or maccabiah.com