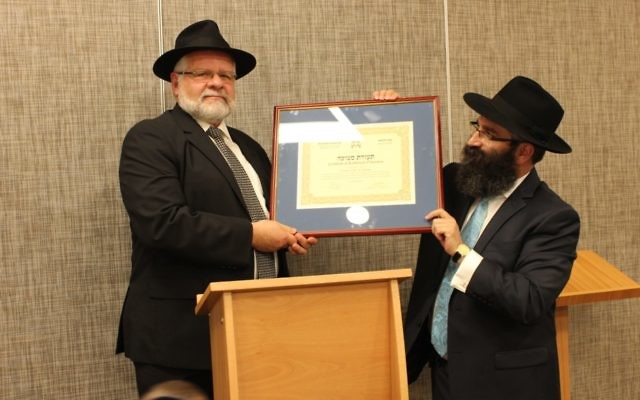 Shmuel Morris (left) is presented with his certificate of rabbinical ordination from Rabbi Motty Liberow of Hamerkaz Shelanu.

SHMUEL (Sidney) Morris has received his rabbinical ordination – at the age of 68!

The retired university academic elected to obtain an online semicha through a Chabad program based in St Paul, Minnesota.

“I decided in retirement I should do some sort of organised Jewish learning,” he told The AJN.

He said he thoroughly enjoyed the course, which involved online classes in real time with a teacher and fellow students from around the world.

He noted that the schedule of written and oral examinations was “rigorous”, particularly when he had to complete an oral examination over Skype with a rabbi in Toronto from 2-7am Melbourne time.

Rabbi Morris doesn’t plan to practise as a rabbi – that was never his goal – but said he gained a lot from completing the course.

“It forced me to learn things I wouldn’t otherwise learn,” Rabbi Morris said.

He completed the ordination over three years, and celebrated the milestone of receiving his semicha on Sunday at Hamerkaz Shelanu with family and friends.

Since completing the semicha program, Rabbi Morris has started the Dayanos program, which will qualify him to be a judge, or a Dayan, in the Beth Din.

He doesn’t intend to use that in a practical sense either, but simply wants to continue learning.

A former professor of mathematics, Rabbi Morris has held positions at many universities in Australia, the United States, the United Kingdom and Israel. He has also written four books on mathematics and continues his research today.

Rabbi Morris was born and grew up in Brisbane. He wasn’t religious in his youth, but came to it during his 20s and, together with his wife Elizabeth, grew in his observance. Since then he has felt strongly about Jewish learning and has been involved with a number of communal organisations around Australia.

But “it never crossed my mind that I could become a rabbi”, he admitted.