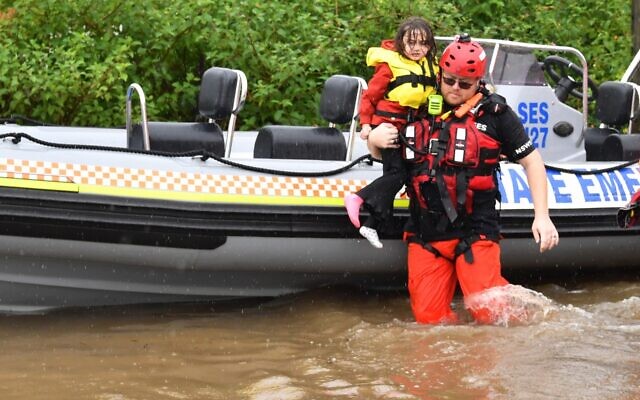 SES assisting a family during their evacuation from a flooded property at Upper Colo in north-western Sydney this week. Photo: AAP Image/Dean Lewins

AFTER living through drought, bushfires and now floods, mid-North Coast resident Mark Butow told The AJN this week, “There’s not much more that can happen.”

Butow, who with wife Anna has been living in Old Bar, 10 kilometres east of Taree, for five years, has had his Pesach plans thrown into disarray by the once-in-100-year flooding event.

“It’s going to be just the two of us … We were going to go down to Sydney to my family, but it doesn’t look like that’s going to happen. Fortunately my nephew came up here last week and brought us a supply of matzah and gefilte fish, et cetera,” he said.

“We’re running out of supplies here … Taree itself is completely isolated, the bridge into Taree has been hit by a shipping container and a concrete water tank, and as a result it’s not safe and that could take three weeks to open.

“So we do feel isolated but the township of Old Bar is a very close-knit community and we all support each other.”

Butow, who said he lives in a “good, sturdy house” two kilometres from beachfront and riverfront areas that have been flooded, said he and Anna are not panicking.

Describing cows floating down the river and farmers losing up to 50 per cent of their livestock, he said, “These are the people you’ve got to worry about. Not us – we’re fine.”

One hundred and fifty kilometres to the south, Rabbi Yossi Rodal of Chabad of the Hunter described members of the community losing electricity, a lady who hasn’t left her house due to a flooded driveway and another person whose car got stuck in a giant puddle, resulting in extensive damage.

“It has stopped a lot of people leaving their homes, especially older people,” he added.

An appeal has been set up by the NSW Jewish Board of Deputies (JBOD) and B’nai B’rith – who ran a similar appeal last year for the bushfires – to help people affected by the flooding.

“It’s our duty to help those who have been overcome,” B’nai B’rith NSW president Anna Marks said.

JBOD president Lesli Berger said, “It has been a harrowing time for thousands of Australians, and we call on members of the community to do whatever we can to help alleviate the severe distress that this extreme weather has caused.”

Other Jewish organisations are also responding to the crisis.

“Every day we’re making biscuits and meals for the SES and others have been displaced as a result of the floods,” Our Big Kitchen (OBK) founder Rabbi Dr Dovid Slavin told The AJN on Monday.

Jewish House, meanwhile, has made housing available and food from Coles collection boxes is going to those in need due to flooding.

The Israeli embassy in Canberra has also expressed its readiness to assist, posting on Facebook earlier this week, “Our thoughts are currently with those threatened by devastating floods in New South Wales and other parts of the ­country.

“We have extended to the authorities our offer for any assistance, professional or otherwise, that the State of Israel can render.”