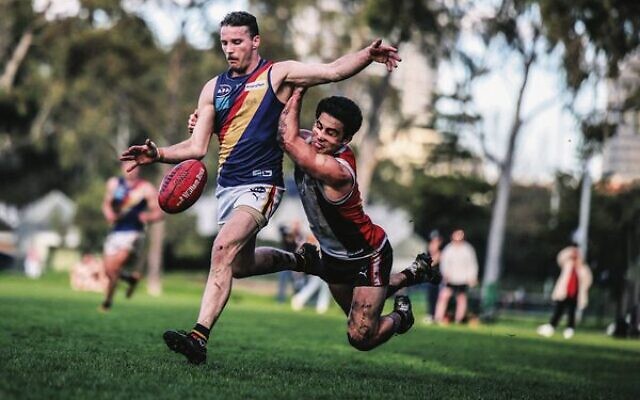 This desperate tackle by AJAX captain Nick Lewis prevented a St Bedes-Mentone Tigers player from scoring a winning goal in both teams' last match of the VAFA Premier B men's season last Saturday at Gary Smorgon Oval. The match ended in a draw. Photo: Jack Dilks

Despite missing out on a place in the upcoming VAFA Premier B men’s finals series with a 6-9 win/loss record, the Jackas completed their season with a spirited, and nail-biting, draw at their home ground, Gary Smorgon Oval, against the St Bedes/Mentone Tigers last Saturday afternoon.

It was departing head coach Adam Andrews’ last match after four years at the helm, and although his troops couldn’t secure a win, they achieved the next best thing.

The Tigers got off to a fast start, leading by 21 after the first quarter, but AJAX hit back to trail by just two points at three-quarter time.

Kane Nissenbaum’s goal with two minutes remaining gave the Jackas a slender lead, but an amazing centre clearance and goal by the opposition returned them the lead.

Nick Pike showed admirable composure with a minute left to create one last scoring opportunity for AJAX teammate Brandon Joel, whose snap fell agonisingly short, resulting in a behind to tie the match at 11.9 (75) to 10.15 (75).

With just seconds remaining, St Bedes threatened to score a goal, but a diving tackle by AJAX captain Nick Lewis put out that fire.

The club’s development team also finished their season with a strong performance in reserve grade, bouncing back from a slow start to win the third quarter, but ultimately lose their match against St Bedes/Mentone by 7.4 (46) to 10.18 (78).