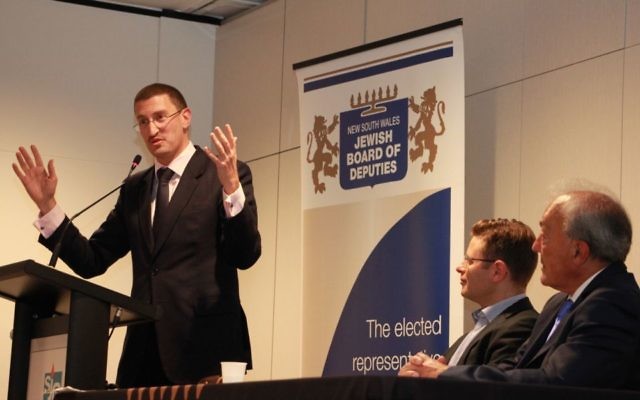 IT was a homecoming for Julian Leeser, and a timely reconnection for Dr Mike Freelander, when the two newest Jewish federal MPs in the House of Representatives addressed the NSW Jewish Board of Deputies’ (JBOD) November plenum.

Sporting a neatly trimmed “Movember” moustache, Liberal Berowra MP Leeser revealed that chairing JBOD’s community relations committee for the last three years “was one of the best things I did to prepare myself for a career in Parliament”.

“In this federal Parliament we have six Jewish parliamentarians – a record since Federation – something that should be a great source of pride to all our community,” Leeser said.

“For far too long, members of our community have considered politics as a grubby game that is for other people, and that we can afford to be spectators and stand back.

“But as that great Talmudic scholar, Woody Allen, reminds us, ‘The world is run by those who turn up.’”

Leeser said he’s been “overwhelmed” by the response to his maiden speech in Parliament, in which he described the devastation of his father’s suicide.

“I’m still getting about three letters or emails about mental health per day, and I’m taking on as many meetings as I can.

“Hopefully within 12 months, I’ll bring out a book to retell some of those stories, but also to chart a course in relation to public policy.”

On the Racial Discrimination Act, Leeser said while he welcomes a Joint Parliamentary Inquiry to examine issues related to process, his position is that Section 18C must be maintained because “the history of the world demonstrates that what starts with racist words often leads to racist violence.”

Freelander, the Labor Member for Campbelltown, told the plenum he is not a religious person, but identifies as a Jew and is very proud of his Jewish heritage.

“One of my ancestors, Abraham Reuben, helped build the first -permanent synagogue in Australia, in Hobart, and I’m also very proud that my grandfather, Randolf Griffiths, helped found the Temple Emanuel.”

A GP and paediatrician, Freelander said he is in Parliament “to put forward the policies that I think are very important for the families and the children that I’ve looked after for 40 years”.

Freelander said Australia’s more egalitarian society is “what’s saved us from Trumpism”, but major inequities remain in access to healthcare and affordable housing – “issues I get the most calls about every day”.

“There are 200,000 families on the public housing waiting list, and that to me is unacceptable,” Freelander said.