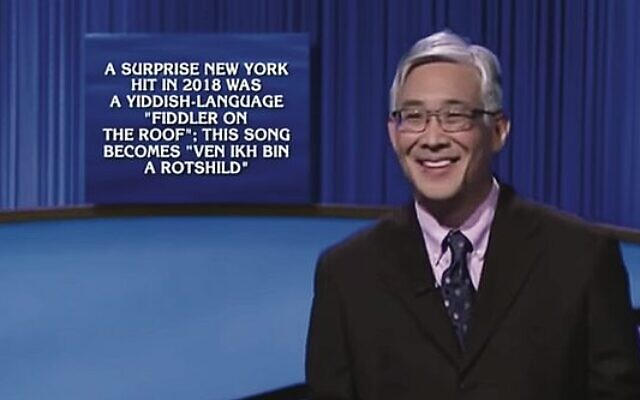 US game show Jeopardy! devoted an entire category to the Yiddish language in a first-ever professors tournament that aired earlier this month.

Ed Hashima, a professor of history at American River College in Sacramento, California, dominated the theatre category. He correctly identified one play as the Yiddish King Lear, named Purim as being tied to Yiddish theatre’s origins and answered that Marlon Brando’s acting teacher was Stella Adler, who grew up in a family of Yiddish theatre royalty.

One clue stumped all of the contestants, who declined to buzz in. “The play Chantzhe in Amerika is about a woman wanting to learn this modern play; How I Learned To do it is a non-Yiddish play,” Jewish host Mayim Bialik read.

The correct response: What is ‘Drive, referring to the classic work by Paula Vogel, the Jewish playwright whose own passion for Yiddish theatre has been a galvanising force in her recent work.

On Twitter the day after his victory, Hashima said that he had discussed his Yiddish theatre knowledge with Bialik after the episode taped.

“Mayim and I had a conversation after the game about that category and my success with it!” he wrote. “The response? What are a Jewish brother-in-law, many Jewish friends, and a love of all things Fiddler?”