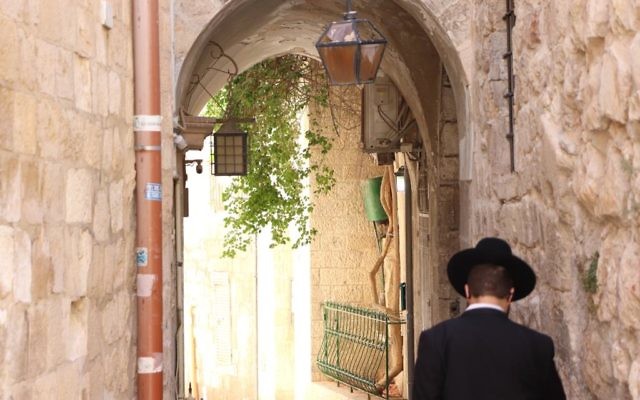 In the Jewish Quarter of the Old City, Jerusalem. Photo: Rebecca Davis

It doesn’t have to be one or the other, says Rebecca Davis as she reflects on just a few highlights of both cities.

IT is an age-old debate, even more polarising than the Melbourne versus Sydney argument. Jerusalem or Tel Aviv?

Undoubtedly, both cities have their allure.

Jerusalem is the ancient treasure, perched atop the Judean Hills. An old kingdom, it is the spiritual heart of Israel, and the epicentre of each of the three Abrahamic faiths. And the feeling is palpable — often likened to a pressure cooker on the brink of explosion at any given moment.

Contrastingly, Tel Aviv is the new, the trendy, the hip, the cool. Carefree as the bicycles and scooters that whir past on Rothschild Avenue, the next new and exciting activity, restaurant or bar is just around the corner.

But to relegate Jerusalem and Tel Aviv to their respective stereotypes is a disservice to them both, because there are surprising gems — both new, and old — to be found in each city.

Follow the way of the prophets to Villa Brown Hotel in Jerusalem. Not just because it is on Ha’Neviim street, but because this luxurious hotel is a welcome oasis of tranquillity in the hubbub of Jerusalem.

Let’s be real: accommodation in Jerusalem can be hit or miss. I’ve done apartments, an Airbnb in the Old City (hosted by the grandson of the Shah of Iran who is now an Orthodox Jew – yes, I’m serious) and I’ve had the requisite post-Israel-program early-20s hostel experience. I’ve even stayed at a very nice hotel in East Jerusalem. 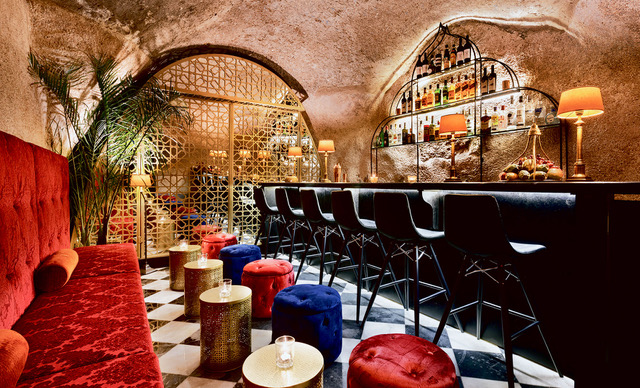 Villa Brown is the winner, hands-down.

The 19th century villa sits just a five-minute stroll away from Jaffa Street and a 15 minute walk to the Old City. Beyond the great gate is a garden filled with brilliant coloured flowers; explosions of colour against the Jerusalem stone exterior.

Enter the villa, and you are immersed into opulence reminiscent of Ottoman times. Plush velvet upholstery, glossy marble tabletops, and rich fabrics with accents of red, gold and emerald dazzle. Mellow deep house tunes play throughout, a contemporary juxtaposition to the palatial vibes which extend to the rooms. Enjoy the heights of the rooftop jacuzzi which takes in a vista of Jerusalem; or the depths of the Cave Bar. Once an 1800s water cistern, the bar is a sophisticated cavern for cocktails that beckon to be sipped. 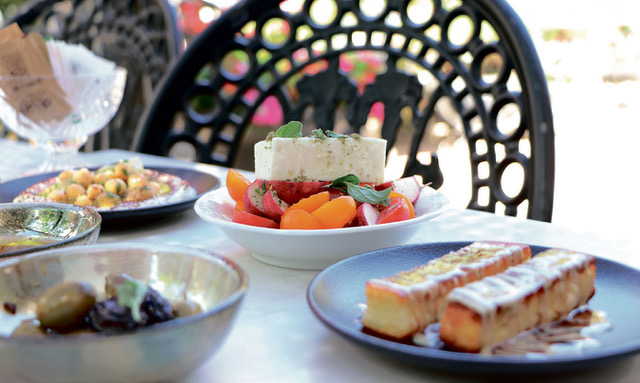 But arguably, the best feature of the villa are the breakfasts. Let the buffet come to you, intricately crafted little plates with morsels to delight: fried cheese drizzled with tehina and honey, delicately marinated olives, fiery shakshuka, just to name a few, and of course — hummus. Would it even be an Israeli breakfast without it?

Speaking of the traditional Israeli fare, Villa Brown is only a lazy 10 minute walk to the celebrated shuk, Machane Yehuda. And if you are still looking for more of the food favoured by the locals, find your way to Azura. It’s obscurely tucked away around the corner from one of the arteries to the shuk, but ask around, and people are happy to point you in the right direction. 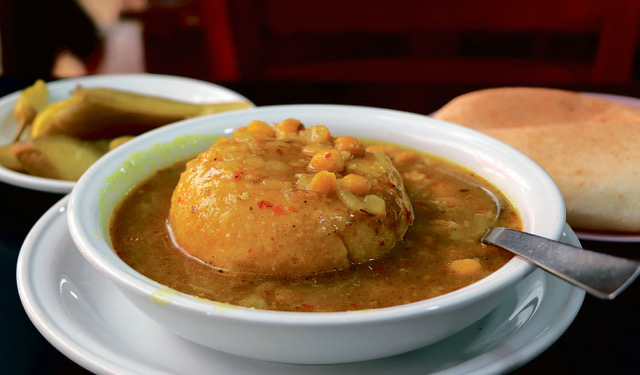 Azura is an institution, even featured in Yotam Ottolenghi’s food documentary, Jerusalem on a Plate. There, it is incumbent upon you to order kubbeh hamo, a punch-you-in-the-face Kurdish piquant soup with chickpeas. “It’s a little hot,” you might be told, but accept the offer of some to try first to see if it is to your liking. Yes, even if it is in the height of summer. It won’t be too hot, and the experience of sliding your spoon through that glorious meat filled dumpling is worth it alone.

If you prefer a dining experience of a more modern kind, be sure to find your way to the Anna Italian Cafe at Anna Ticho House. Located a stone’s throw from Villa Brown, it is also cleverly hidden in a square between apartment buildings, and is a delightful surprise to stumble upon. The historic house was one of the first homes built outside the Old City walls during the 1860s, and is now managed by the Israel Museum. 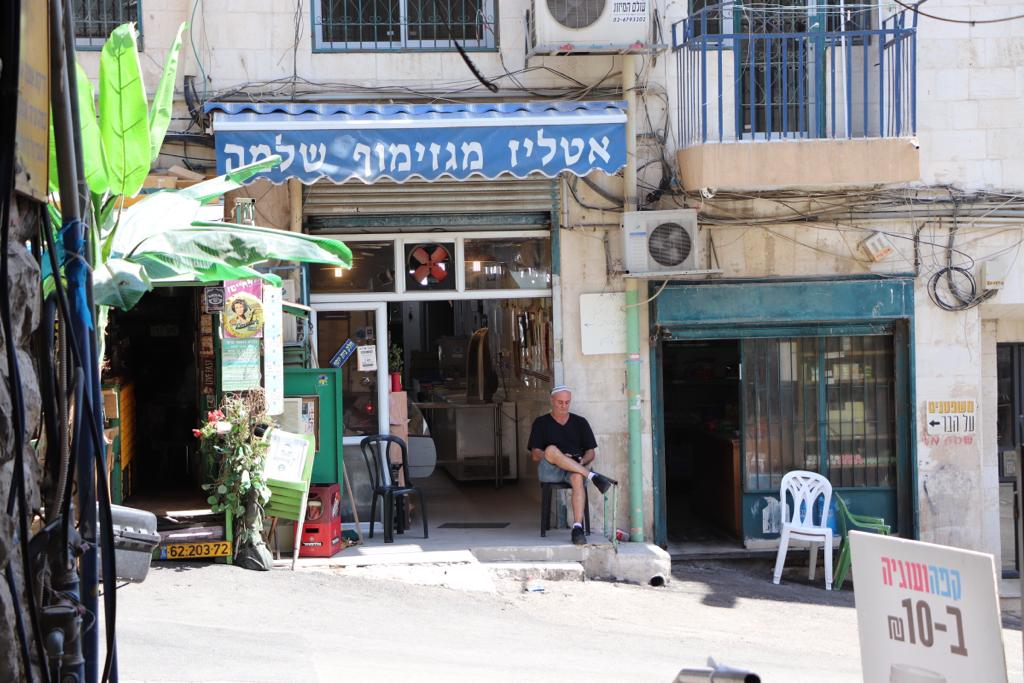 A Jerusalem shop on the path to Machane Yehuda. Photo: Rebecca Davis

While the bottom level houses the art of Israel’s beloved painter, Anna Ticho, and space for temporary exhibitions, head upstairs to the cafe. On a balmy summer’s evening, the kosher dairy restaurant is abuzz. Fresh hot bread from the oven, black olives doused in oil, and a bowl of fresh tomatoes, mozzarella cheese tossed with basil and balsamic vinegar washed down with a glass of rosé will remind you of the simple joys of life. Sit at the bar, and make friends with the guy or girl behind it. They will be sure to give you some great tips and insights to their city.

And you can feel good about where your food comes from too. Anna is a social business, operating a program for Jerusalem’s youth-at-risk with the aim of providing training, employment and assisting with integration into society by imparting the profession of cooking. Just eat there immediately.

For those looking for a little more adventure in their culinary experience, be sure to leave the confines of the Jewish Quarter of the Old City, and break bread with the Armenians, the Christians and the Muslims. 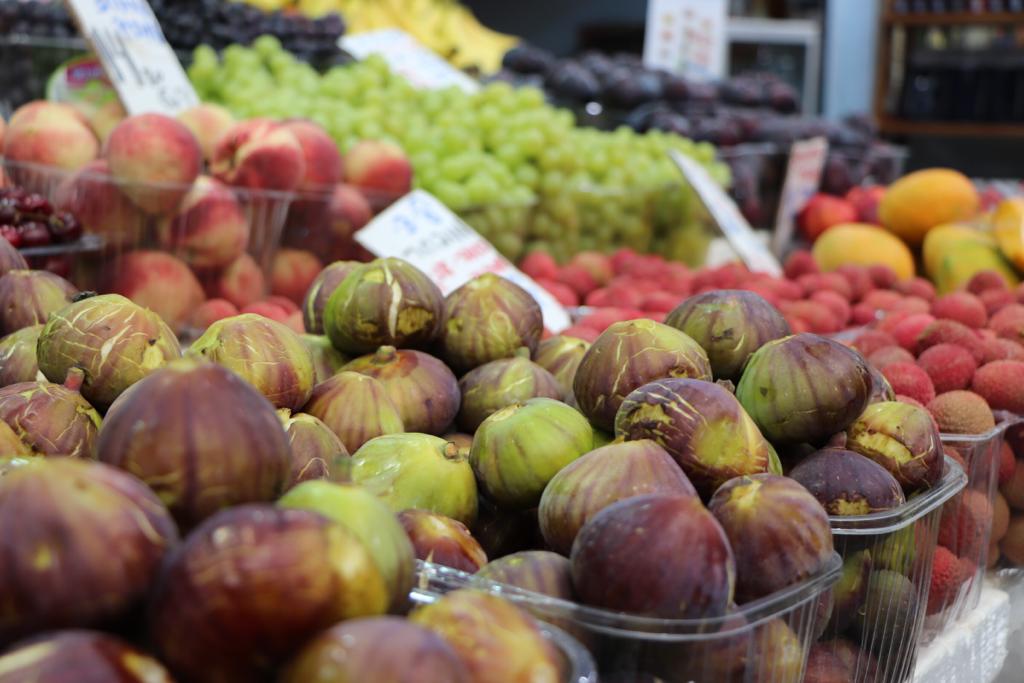 The musakhan (a Palestinian dish of chicken, onion and sumac rolled in Bedouin-style bread, shrak) served with a salad of the crunchiest ingredients, at Amigo Emil is to be tried. Tucked away in a cave off a narrow laneway in the Christian Quarter, the restaurant was a post-Shabbat-can’t-find-anything-open-need-to-eat-NOW discovery. And what a happy discovery the musakhan was, a surly waitress’s answer to the question of what she would order. It is an explosion of flavours, that will probably forever evade me.

When you are done, find some baklava and black coffee or nana tea to perfectly complete the meal. There really is no other way.

Oh Jerusalem, with your food, and culture, and history and surprises. You continue to enchant.

A SHORT chug in the bus down the freeway lies Tel Aviv, the metropolis which is as relentless as the Mediterranean waters that lap upon its shores. I’m not sure there are words that are adequate enough to describe my love for this city.

While the choice may be difficult as to which locale you wish to stay in, you are bound to find something that suits. If the leafy charm of Rothschild Boulevard allures, definitely check out 65 Rothschild. 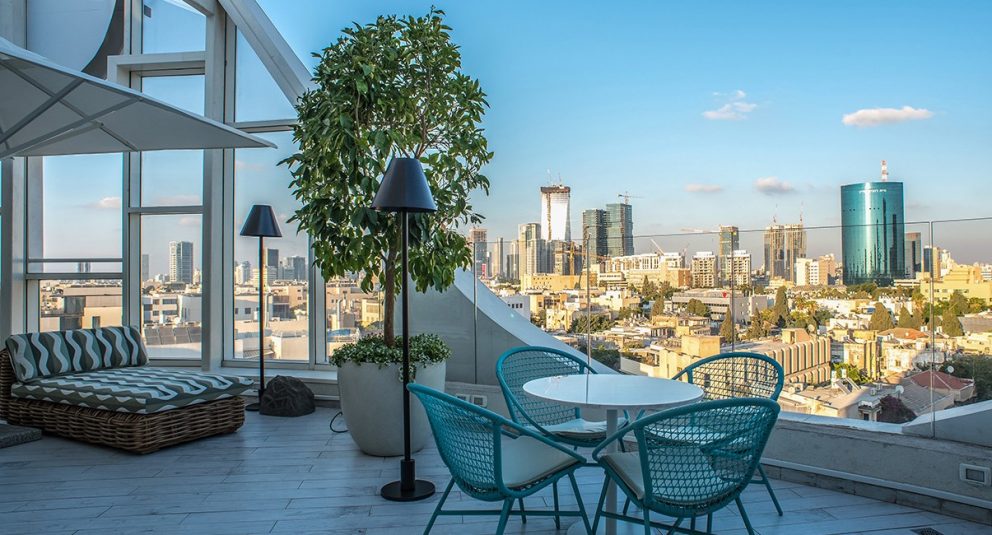 A sleek new instalment in the Atlas Hotel chain, the hotel is large enough to feel luxurious, but still holds the warmth of boutique accommodation. The very comfortable rooms take in views of the Boulevard and across the city. Top three experiences at 65 Rothschild?

One: A fabulous Israeli breakfast which can be enjoyed on the outdoor patio overlooking Rothschild.

Two: Happy hour. Yes, you read correctly. Every evening complimentary canapés and drinks are offered in the lobby.

Three: The night time view from the rooftop. Be sure to sneak up there, and if you’re lucky, you may have it all to yourself!

If you prefer a slightly faster pace however, head to Poli House AKA my refuge. I was originally booked for one night at the boutique hotel at the intersection of Allenby and Nahalat Binyamin, neighbour to the Shuk Ha’Carmel. But after an Airbnb which was, ahem, far from what was promised, I was promptly back at the House. It’s cool and it’s urban with distinct modern design and super friendly staff. 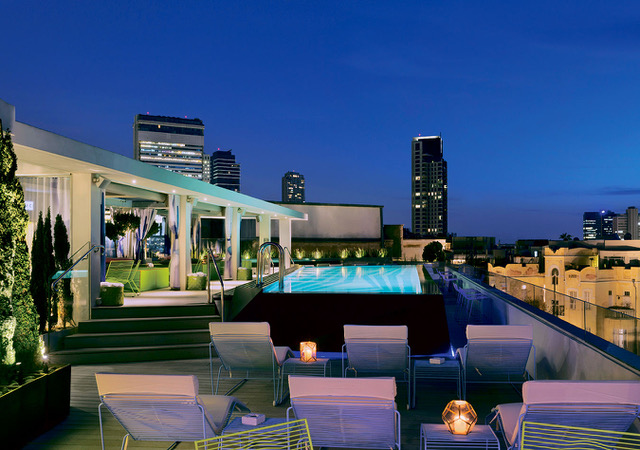 Originally built in 1934 as commercial office space and known as Polishuk House, the building has been re-interpreted by architect Karim Rashid, and is an embodiment of the eccentricity of the city. Think white with unexpected splashes of colour. And yes, the location is amazing, a 10 minute walk to the beach, and endless handfuls of figs, nuts, and dried fruits that await in the shuk below.

But that is when you leave the hotel, and once you discover the cabanas and cocktails at the rooftop pool with views stretching from the Tel Aviv skyline to the ocean, leaving can be a challenge. This respite in the middle of the city presents the perfect vibe, by day or night. Poli House is fun — from the complimentary arak (of course) that is offered on arrival, to the little neverending jar of the most addictive jelly beans and dried fruit replenished daily in your room.

However, the real culinary treat is to be found beyond Poli House, and further around the corner on Nahalat Binyamin. Discovered on a late night stroll, Arte Natural Gelato is ice-cream of the divine. Chefs Stefania Pagani and Marco Camorali serve up Italian gelato in its traditional art form, with their recipes originating from Tuscany and Sicily. They create with an ethical consciousness; using local and seasonal produce as much as possible, prepared entirely in house, and without any colouring or emulsifiers. Flavours not to be forgotten include pistachio and tiramisu. It’s a big call, but it may just be the best ice-cream ever. Booking flights to Tel Aviv now. 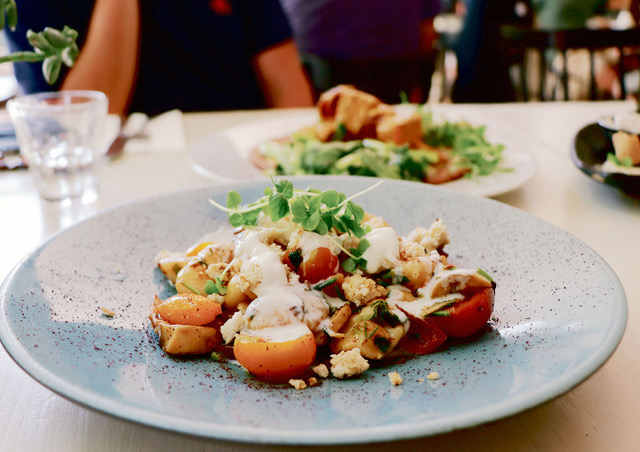 The Tel Aviv food scene is constantly re-inventing itself. Located in the very trendy neighbourhood of Neve Tzedek, the vegan restaurant Meshek Barzilay is definitely worth the visit — even if you think you don’t like vegan food. Leave all judgement at the door, and immerse yourself in its relaxed and rustic vibes.

Embracing the farm-to-table philosophy, Meshek Barzilay ensures all ingredients are sourced locally, “the only way to guarantee nutrition and quality in every bite, while supporting sustainable agriculture in Israel”. And you can taste it. The gnocchi is a real standout — a plentiful serve with fluffy potato pillows tossed in olive oil, cherry tomatoes, parsley, mushrooms and kalamata olives, served with vegan yoghurt and nut feta cheese. Yum! 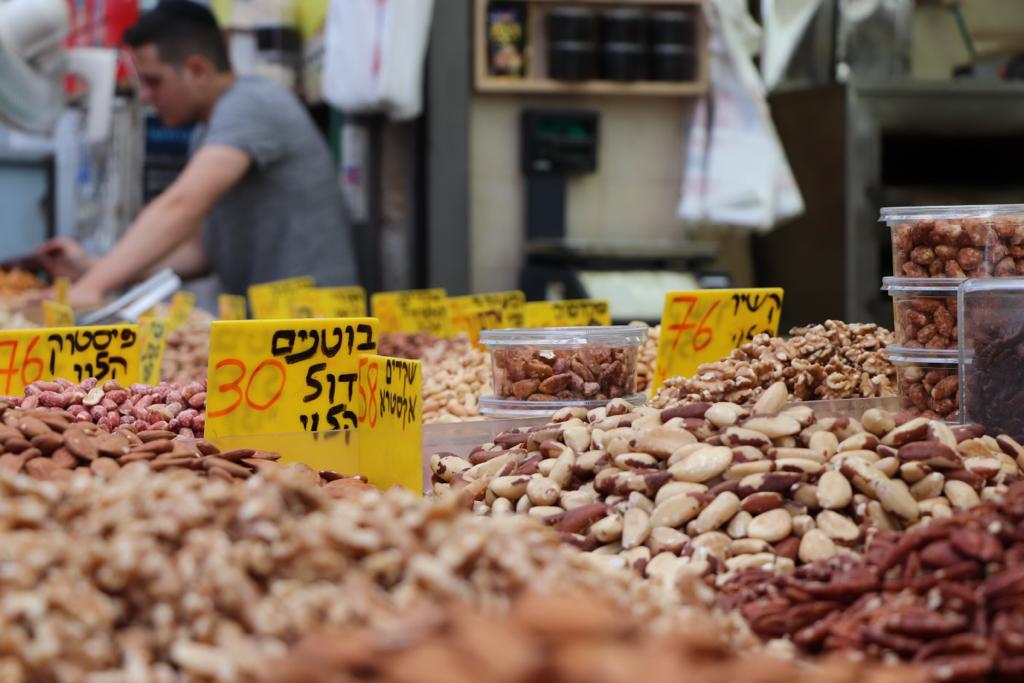 But as delicious as Meshek Barzilay is, I remain a staunch traditionalist. And in Israel, one cannot ignore the effortless simplicity of good street food. Felafel, shawarma or even a plentiful bowl of hummus with pita have fuelled the people that built the nation.

If you haven’t tried sabich, you must make the pilgrimage to Sabich Tsernikovski, a hole in the wall place just off Allenby Street. They may only do one thing, but they do the traditional Iraqi-Jewish dish superbly: golden fried slices of eggplant squidged into a pita with potato, boiled egg, salad, pickles (extra pickles, b’vakasha!), tehina, hummus and amba (mango sauce). Get your paper bag filled with sheer gladness, find a bench on the street to sit, bring plenty of napkins, and enjoy. You may attract some local cats, but they know a good thing too. 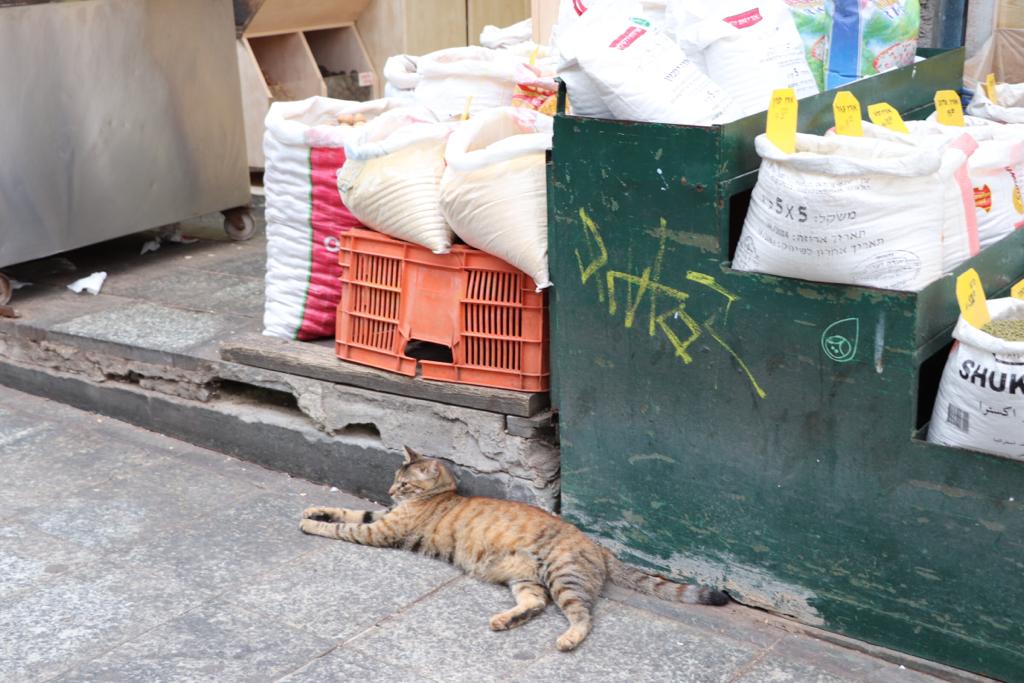 Undeniably, both Jerusalem and Tel Aviv offer much to love. For an ancient land, there is always something new to discover. The question may be Jerusalem or Tel Aviv, but the answer is Jerusalem and Tel Aviv. So, while celebrating Israel’s independence this Yom Ha’atzmaut, remember to celebrate all that Israel is, in its fabulous diversity. We really are pretty blessed.

Rebecca Davis is features editor of The AJN.