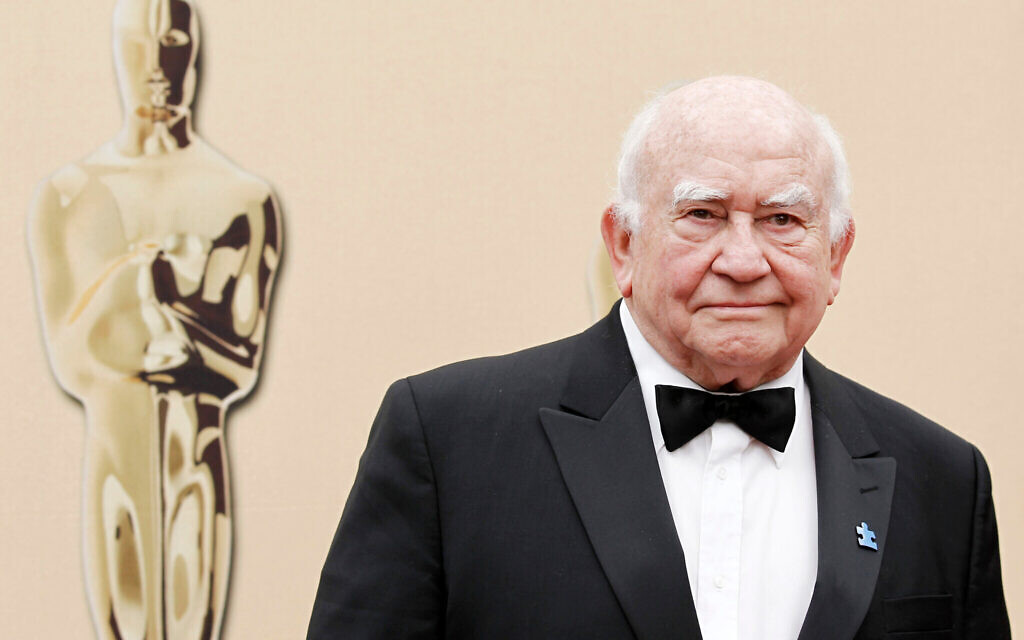 Ed Asner, the Emmy award-winning Jewish actor who trademarked a gruff, flawed, and loving persona as Lou Grant in “The Mary Tyler Moore Show” and co-starred in the Pixar fan favourite animated movie “Up,” has died at 91.

“We are sorry to say that our beloved patriarch passed away this morning peacefully,” the family said Sunday on Asner’s Twitter account. “Words cannot express the sadness we feel. With a kiss on your head — Goodnight dad. We love you.”

Asner, who once told The Forward he was “too much of a Jewish bourgeoisie” to play conventional roles, was an established character actor when he signed on in 1970 to “The Mary Tyler Moore” show to play her boss at a local TV news operation in Minneapolis.

There were occasional hints throughout the Mary Tyler Moore series that the Lou Grant character was Jewish. In one episode, a toxic character suggests he get together with Mary Richard’s friend, Rhoda Morgenstern, who is explicitly Jewish, because they’re both “earthy.”

In 1977, after the Minneapolis TV station fires all but one of the fictional “Mary Tyler Moore” characters, the Lou Grant character moves to Los Angeles to helm a print newsroom in a spinoff show “Lou Grant.” Asner is the only actor to have won two Emmys for playing the same character in two series.

The hour-long “Lou Grant,” considered one of the truest TV depictions of how news is gathered, abandoned the light sardonic touch its sitcom predecessor had in depicting journalists. In a newsroom modelled on the Washington Post depicted in 1976 in “All the President’s Men,” Grant’s character template was Harry Rosenfeld, the Post’s Jewish city editor known for simultaneously berating and nurturing young reporters. 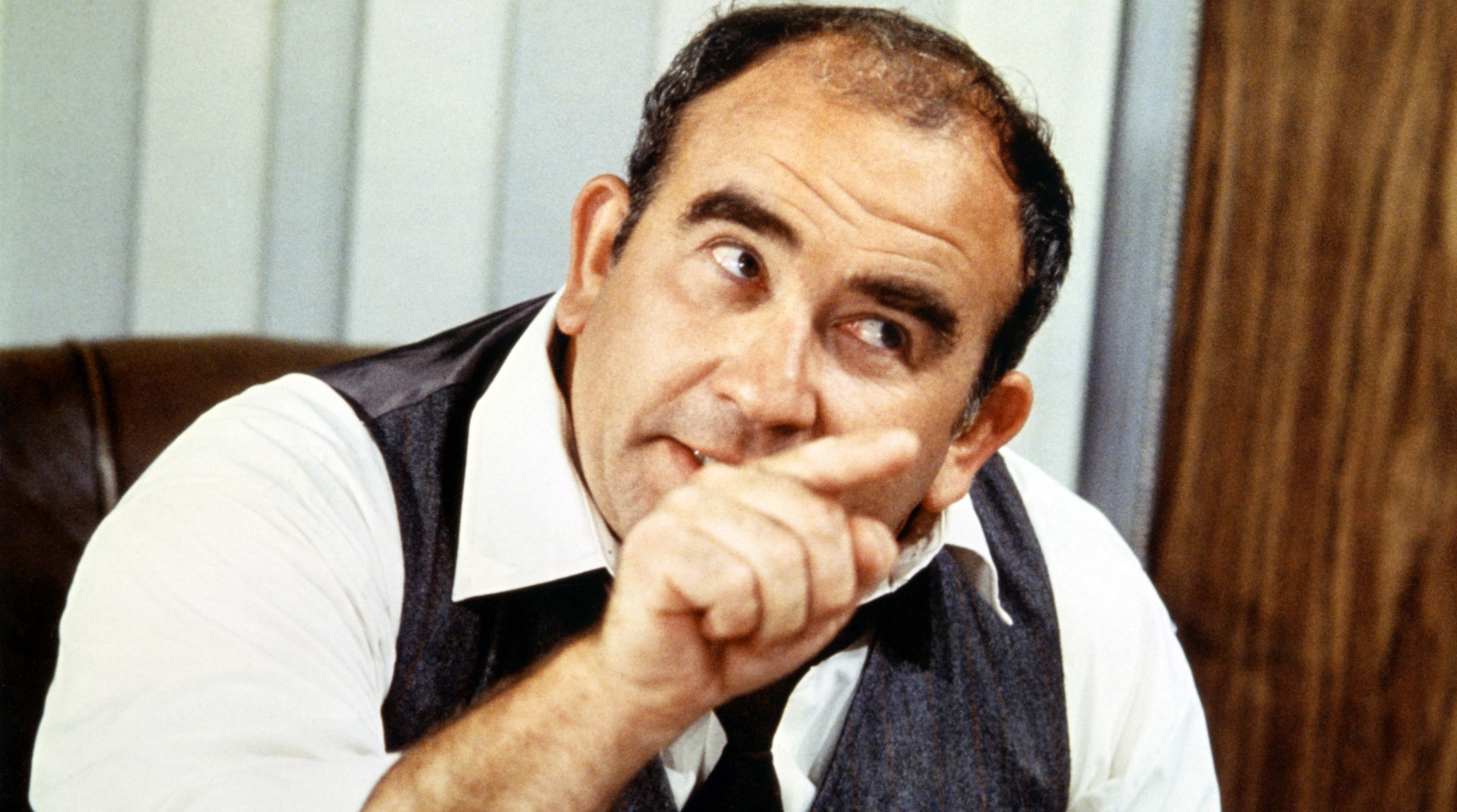 Asner as newspaper editor Lou Grant in “The Mary Tyler Moore Show,” circa 1975.

Each episode grappled with an ethical dilemma. In one memorable episode based on a true story, a reporter assigned a profile of a local neo-Nazi discovers that he is Jewish. The neo-Nazi beseeches the reporter not to reveal the truth; the reporter consults with Grant, who counsels her to include the information. The neo-Nazi kills himself, and Grant and the reporter are left to wonder if they made the right decision.

With such open-ended stories, “Lou Grant” heralded the transition from the pat moralistic TV dramatic fare that prevailed until the 1970s to the more fraught and ambiguous fare that has flourished since the 1980s. CBS canceled the series in 1982; it claimed ratings was a factor, but conservative groups had threatened to boycott the network because of Asner’s real-life activism. As president of the Screen Actor’s Guild, Asner spoke out against the Reagan administration’s backing of right-wing insurgents in Central America.

As Asner aged, many of his characters were more explicitly Jewish, from Joe Danzig, a worn-out principal at a troubled inner-city high school in “The Bronx Zoo,” in 1988, to Sid Weinberg, the abusive stepfather in the recent “Karate Kid” reboot, “Cobra Kai.”

Asner acted until the end, and the Internet Movie Database lists more than a dozen roles that are in production or post-production, or that had yet to film. Beginning in 2016, he toured the country playing a Holocaust survivor in “The Soap Myth,” a run interrupted by the coronavirus pandemic.

As a public persona, Asner was unabashedly Jewish. In 1981, he headlined a PBS documentary on Passover, and in 2012, he made a Jewish Hanukkah pitch for a charity that distributes cattle to impoverished communities. He joined Jewish Voice for Peace initiatives in speaking out against Israel’s occupation of the West Bank.

“I’m amazed by Israel’s militaristic achievements and accomplishments, and yet I think I gloried more at the Jewish image of the Children of the Book,” he told the Los Angeles Jewish Journal in 2005, after receiving an activism award from a Jewish group.

In 2019, Asner narrated “The Tattooed Torah,” an animated version of the children’s Holocaust education tale. “This little Torah is the story of our people, tattoos and all,” Asner says in the narration. 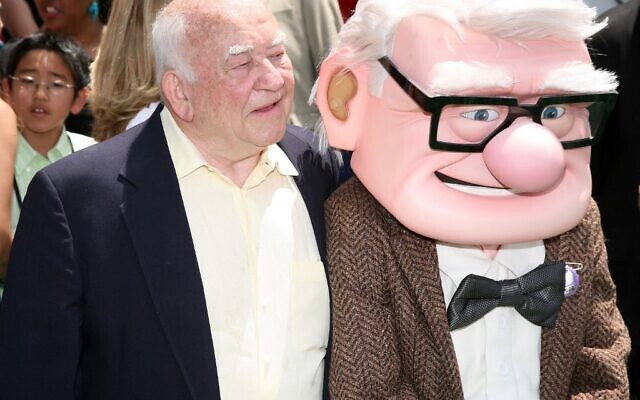 Ed Asner and character Carl Fredricksen arrive for the premiere of Disney Pixar’s ‘Up,’ at the El Capitan Theatre in Hollywood on May 16, 2009.

Grant, born and raised in Kansas City to Jewish immigrant parents, told interviewers that his parents practiced a “midwestern” former of Orthodox Judaism, observing many of the religious laws but driving to synagogue. More substantially, he said they instilled in him a belief that Jewish practice was inseparable from activism.

“I was raised to believe that giving back to your community is the good and right way above all, and that we were needed to uphold the faith, and if we upheld it, we would be doing right,” he told the Jewish Journal.

Grant was at times a go-to villain: Playing a murderous thief in 1975 and again in 2012, he is perhaps the only actor to straddle the original “Hawaii Five-O” action TV series and its most recent iteration.

But his trademark was a deeply flawed character who finds redemption in an unlikely place or relationship. In the “Mary Tyler Moore” pilot, Grant badgers job applicant Mary Richards with personal questions: Why did she never marry, what religion is she? When she stands up for herself and says his questions are inappropriate, Grant delivers the one-two that would come to define his characters.

“You know what? You’ve got spunk,” says Asner, as Grant. Moore, as Richards, grins. Grant follows up: “I hate spunk.” Yet he hires her.

He reprised that journey, from cynic to believer, in 2009’s “Up,” the Disney/Pixar feature in which he voices Carl Fredricksen, an elderly man broken and embittered by widowerhood and a modern world seemingly intent on crushing him, who embarks on a balloon journey to South America with a young stowaway.

Like his characters, he told The Forward in 2012 that he had experienced an arc from self-righteousness to self-questioning.

Asked if he had a wish, he told the Jewish newspaper: “Bury my ashes in Mount Scopus.”