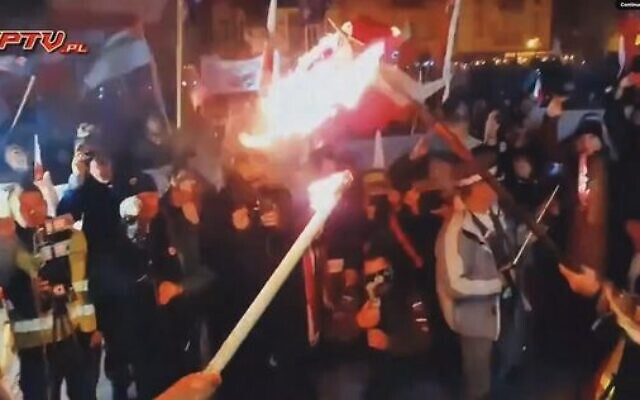 POLISH President Andrzej Duda has denounced displays of antisemitism at a nationalist rally last week on Poland’s Independence Day that included chants of “Death to Jews” and a symbolic burning of a historical text on Jewish rights.

His remarks joined those of Israeli and Polish government officials who have slammed the public expression of hatred to Jews that occurred in the city of Kalisz last Thursday amid holiday celebrations across the country.

“The barbarism carried out by a group of hooligans in Kalisz is contrary to the values on which the Republic of Poland is based,” Duda wrote on his Twitter account.

Participants at the gathering burned a copy of a medieval document that offered Jews protection and rights in Polish lands. The leaders of the event also referred to the LGBT community and Zionists as “enemies of Poland” who need to be expelled.

Three people have been arrested in connection with the rally

Israeli Foreign Minister Yair Lapid welcomed the “unequivocal condemnation” and said Jewish people “expect the Polish government to act uncompromisingly against those who took part in this shocking display of hate”.

“The horrific antisemitic incident in Poland reminds every Jew in the world of the strength of hatred that exists in the world,” he added.

Independence Day celebrations in Poland have in recent years been overshadowed by events led by far-right groups.

The largest was in Warsaw. The mayor tried to ban it, saying the capital city was no place for “fascist slogans”. He had court backing for the ban, but Poland’s right-wing government gave the march the status of a state ceremony, the latest example of the ruling nationalists seeking to curry favour with extremist groups.

Rafal Pankowski, a leader of Poland’s Never Again anti-racism group compared the rally to the burning of books in Nazi Germany. “Having monitored antisemitism for more than 25 years, I have never seen anything like that,” he told JTA.

The rally comes amid tensions between Israel and Poland, following the introduction of new legislation that will effectively prevent Jewish heirs of property seized by the Nazis during World War II from reclaiming it.

In response to the passing of the law in August, Israel recalled its charge d’affaires from Poland and told the Polish envoy to the Jewish State, who was vacationing in Poland, to not bother coming back.

Lapid at the time called the law “antisemitic and immoral”.