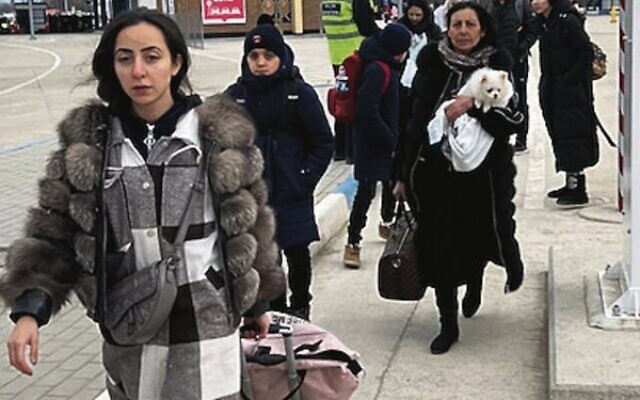 Ukrainians fleeing with their pets.

COMMUNAL member Kevin Kalinko, who initiated the coordinated response from the Australian Jewish community to help Ukrainian refugees, said he was determined not to stand idly by as another tragedy affecting the European Jewish community unfolds.

The AJN reported on the initiative last week.

Kalinko said he approached JCA CEO Alain Hasson and along with Rabbi Yehoram Ulman and Rabbi Eli Schlanger from Friends of Refugees from Eastern Europe (FREE), they formed a small umbrella group to provide support.

This expanded to include Jewish House CEO Rabbi Mendel Kastel as well as JewishCare.

Kalinko said it has been heartwarming to see so many individuals and organisations come together.

“When Russia invaded Ukraine I, like many in our community, wanted to help in some way. I have always been cognisant of the seemingly actionless Jewish community during the Holocaust,” he said.

“It is wonderful to see the community coming together and working together, leaving behind the history of demarcations and politics and disputes. My sense is that the Jewish community as a whole has been moved by the events in Ukraine and people want to help in some way.”

On Sunday evening, March 20, a Jewish Ukrainian couple fleeing the war arrived in Sydney. They had little more than the clothes on their backs, but they received a warm welcome at the airport from Kalinko, Rabbis Ulman and Schlanger, and others who were there to help them settle in.

“They had decided to flee with a moment’s notice, had been fired upon and narrowly missed a Russian missile at Kyiv train station during their frantic race to the border,” Kalinko said.

With more Jewish Ukrainians expected to seek refuge in Australia, Kalinko says his ‘welcoming committee’ will continue to provide support for the traumatised families.