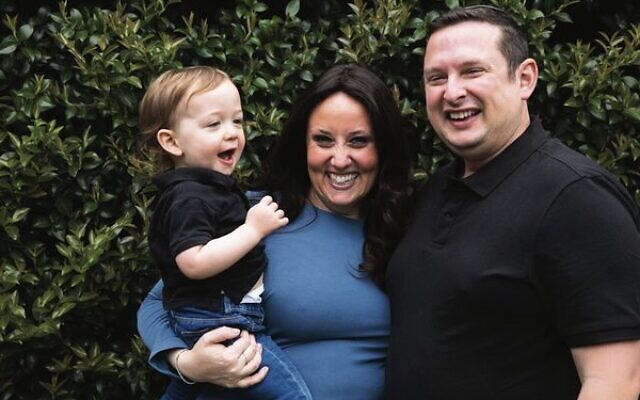 Janine and Shimon Davidowitz with their first son, Levi.

ONE in Six, a documentary about a Jewish couple’s IVF story, will be broadcast nationally on ABC’s Compass this weekend.

The story follows Janine and Shimon Davidowitz as they face the challenges of IVF during COVID and as an Orthodox Jewish couple.

Janine and Shimon conceived their first child through IVF, but it was when they tried to give their son a sibling that their journey became fraught with challenges.

The documentary reveals an added layer to their desire for another child – Janine’s mother was the child of Holocaust survivors whose siblings had perished in the camps.

Her dying wish was that Janine would not have an only child.

“The camera is like a person in the room, we are right there with Janine and Shimon for the retrieval, the moment their little miracle is created, the embryo transfer and the agonising wait for the phone calls from the clinic to tell them how things are progressing.”

Janine Davidowitz said: “We decided to share our journey to give people an insight into what IVF entails, to offer some hope for those in the midst of their struggle and to try to bring awareness to infertility in the wider community. Even though this is something experienced by one in six Australians, there is still so much secrecy and shame around infertility which only makes you feel even lonelier.”

The film was commissioned by the Australian Jewish Fertility Network (AJFN), a charity that assists Jewish families both financially and emotionally to achieve their dreams of having a baby. AJFN was able to provide both financial and emotional support to the Davidowitz couple to help ensure that finances would not be a barrier to their dream of building their family. Chair of the organisation Kerry Gonski said: “Through Janine and Shimon’s bravery and openness, we can offer support by better understanding what they are going through and bringing the conversation into the open.

“ABC expects an audience of approximately 250,000 for the broadcast and we couldn’t be prouder that One in Six will open the national conversation around infertility and go a long way in ending the stigma that surrounds this pervasive issue.”