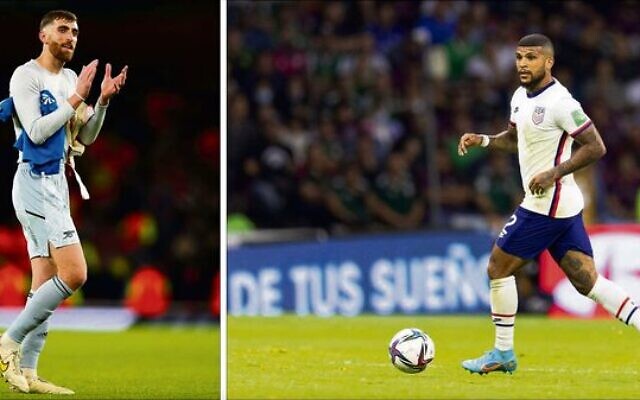 Players of Jewish heritage in national teams that make it to FIFA World Cups are rare these days, but the USA squad currently competing in the 2022 tournament in Qatar have two.

Matt Turner is their starting goalkeeper, and currently Arsenal FC’s backup keeper. He has a Jewish father and a Catholic mother, but identifies as Jewish. It’s his first World Cup, but his USA teammate, defender DeAndre Yedlin, came off the bench in America’s last World Cup appearance in 2014.

Yedlin has a Hebrew tattoo on his right shoulder, in honour of his great-grandparents. He has Latvian, African-American and Native American heritage.

Turner started, and Yedlin came off the bench, in the USA’s opening match on November 22, a 1-1 draw versus Wales. America led until the 82nd minute, when Welsh superstar striker Gareth Bale scored a penalty goal. The USA will play England next on November 26, and Iran on November 30.

Iran began their World Cup campaign with a 2-6 loss to England, and their players refused to sing Iran’s national anthem before kick-off, in apparent support for anti-government protesters in their homeland.