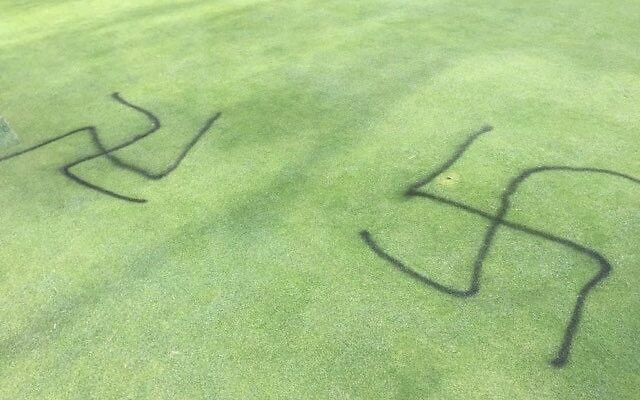 The graffiti at Cranbourne Golf Club.

The incident, which was reported to the Anti-Defamation Commission (ADC), occurred on Tuesday night and was witnessed by multiple patrons.

One player who witnessed the vandalism, who wishes to remain anonymous, said the incident was “disgusting” and “cowardly”.

The club was founded by a group of Melbourne Jewish men in 1951, mostly immigrants, providing a base for Jewish golfers who were barred from playing at several other courses in Victoria based on their religion. 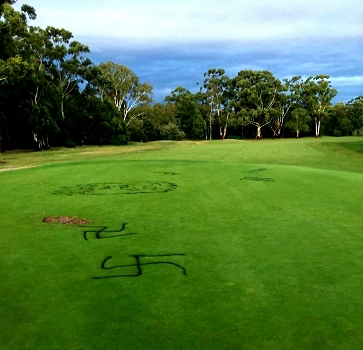 Speaking to The AJN on Thursday morning, Cranbourne Golf general manager Cameron Mott said the club was in the process of removing the graffiti, and that he had reported the incident to Victoria Police and the Community Security Group (CSG).

Mott said the vandalism was “very distressing because we know the effect it would have on a lot of our members”.

Describing the daubing as “vulgar”, he added it was “unacceptable in the greater community and our club, where everybody is accepted”.

ADC chairman Dvir Abramovich told The AJN, “If this hate spree continues, Melbourne will soon be known as the swastika capital of Australia.”

Abramovich said this was “not just graffiti on the ground – it is an attack on all of us”.

“We need to adopt a zero-tolerance approach to this growing societal virus,” he continued.

“We call on the state government to convene a roundtable of leaders from across the spectrum to come together and agree on effective measures to fight against this toxic bigotry that is threatening our way of life.

“We hope that police identifies the perpetrators and that they are dealt with to the full extent of the law.”

Caulfield MP and shadow minister for police and community safety David Southwick said, “Victoria is a proudly multicultural and tolerant community and the use of this imagery in targeted attacks must never be accepted.

“The Nazi swastika is a symbol of hate and this incident reinforces the need for the Andrews government to work with the Liberal Nationals and pass bipartisan legislation banning its use.”

Describing the incident as “totally abhorrent and against all the positive values of our proud multicultural state”, Jewish Community Council of Victoria (JCCV) executive director Judy Fetter said, “All symbols representing hate have no place in our society, and the JCCV has advocated for including such a ban in Victorian legislation.

“The JCCV is involved in ongoing discussions with the Victorian Multicultural Commission, Victoria Police and the Ethnic Community Council of Victoria regarding the increase in racist incidents and online antisemitic posts spiking during the COVID-19 pandemic, and has also been consulting with members of the Victorian government.”

She added, “The Minister for Multicultural Affairs Ros Spence will be addressing the JCCV plenum on June 1 as part of this process of connecting with the Jewish community.”