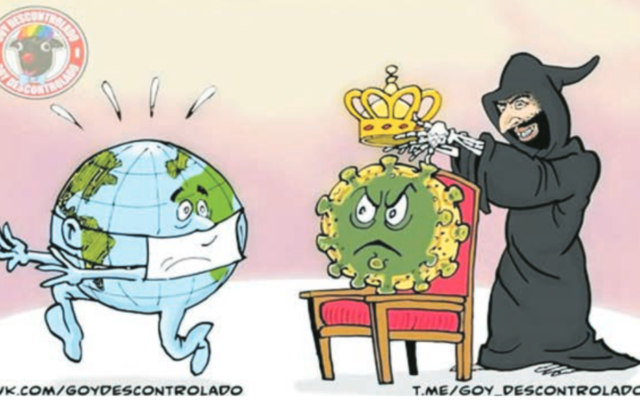 An example of an antisemitic cartoon that emerged during the pandemic.

In the JCCV’s submission, the state roof body argued for the need to continue anti-racism education programs, for ongoing strong engagement between government, police and the Jewish community, and for the government to continue implementing relevant recommendations from the recent Inquiry into Anti-Vilification Protections.

“The Jewish community continues to record antisemitic incidents perpetrated by a range of actors, some of whom are motivated by far-right or neo-Nazi ideologies. A spike in these types of incidents was recorded during the COVID-19 pandemic,” it said.

A hallmark of the “freedom movement” during the pandemic was comparisons between public health measures and the Holocaust, the JCCV said.

AIJAC noted Victoria Police’s own observation that “online commentary on COVID-19 has provided a recruiting tool for right-wing extremist groups”.

“Extreme right terrorist violence is overwhelmingly emanating from individuals radicalised and inspired by material on the internet and social media,” AIJAC said, urging counter-terrorism authorities “to consider measures to ameliorate the effects of this pipeline for violent extremist beliefs”.

AIJAC recommended the government fully implement its expanded anti-vilification measures – including the Swastika ban – but also warned against “compartmentalising the far right as distinct and separate from other forms of ideological extremism”.

The OHPI noted that the pandemic left people feeling vulnerable and looking for someone to blame.

“Extremist groups offer a sense of belonging, addressing the isolation, and a scapegoat,” OHPI said.

The charity also noted that “media coverage of individuals who breached social distancing and other public health regulations resulted in the vilification of these individuals’ faith or ethnic communities online.”