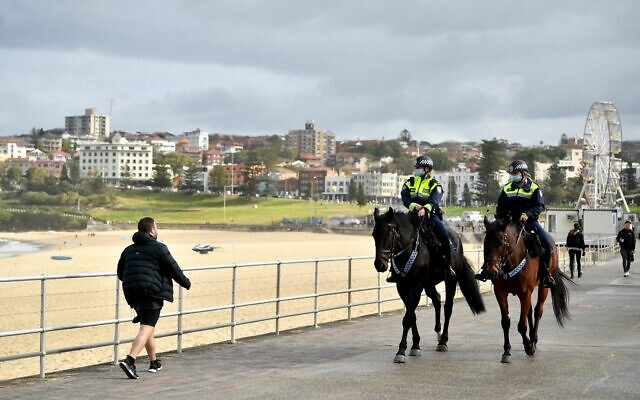 SCHOOL holiday plans are in disarray, shules are shut, Jewish school students are in isolation and the rest of the community is in lockdown as COVID-19 infections continue to sweep Sydney.

As The AJN went to press on Wednesday, Bondi became the state’s largest cluster since the COVID pandemic began, with the number of cases rising to 160.

Since lockdown measures were announced on Friday, students and staff from Emanuel School and Mount Sinai College found themselves in isolation after a pupil and a parent respectively tested positive for COVID-19.

Three kosher venues, a Jewish-owned cafe in Bondi Beach, and a number of businesses frequently visited by members of the Jewish community have also been announced as exposure sites, with authorities urging anyone who visited to get tested and follow the health advice.

On Sunday night, Emanuel School informed parents that a high school student had the virus, causing all secondary staff and students to self-isolate.

Principal Andrew Watt wrote to parents on Tuesday saying formal notification letters had been sent to all families regarding contact with the infected student.

“The campus is currently undergoing a deep clean,” he added.

On Saturday night, Mount Sinai College told parents that a “member of our school community” had tested positive, sending all staff and students into isolation and causing the school to shut to visitors on Monday to allow time for contact tracing and cleaning.

“The good news is at this stage we’ve had no documented transmission at these schools,” Dr Marianne Gale, NSW Health director of Population and Community Health for South Eastern Sydney, told an online COVID forum hosted with the NSW Jewish Board of Deputies (JBOD) and Multicultural NSW on Tuesday.

“We have provided advice and are working closely with the schools around the measures for families and children.”

Meanwhile, Pita Mix and its sister business Poke Mix were both exposure sites after being visited by a positive case last Monday, June 21.

Both stores temporarily closed while a deep clean took place and all staff were tested, reopening for takeaways on Tuesday once all staff had returned a negative result.

NSW Health is also reminding the community about “key venues of concern” including popular, Israeli-style Lyfe Cafe in Bondi Beach, which was also an exposure site.

“Where we may not have seen transmission before, we’re actually seeing very extensive transmission,” Dr Jan Fizell, a senior adviser in the office of the Chief Health Officer, told Tuesday’s online forum.

“We’re also seeing multigenerational transmission, where older people who may not have been tested or may have received one dose of a vaccine, have transmitted it to their children and to their grandchildren. We’re now seeing – and this is new to us – child to child transmission.

“So this is a very different picture to what we have seen before.”

She urged members of the community to minimise their movements.

JBOD president Lesli Berger has urged the community to comply with the health orders and be vaccinated at the first opportunity.

“Given the location of the Bondi cluster, there is a greater risk to our community.

“We are in this together, and the best way we can support each other is by following the health orders,” he said.

JewishCare, Jewish House, Our Big Kitchen, COA and KM Cares are among the organisations offering essential services to the community during the lockdown period.

Meanwhile, The AJN was contacted by a concerned member of the community who claimed a number of guests from Bondi attended a simcha celebration last week at a Melbourne shule, where COVID restrictions were blatantly ignored, and bragged about how they had lied on their disclosure forms to say that they were from the north shore.

More coverage in this week’s AJN.