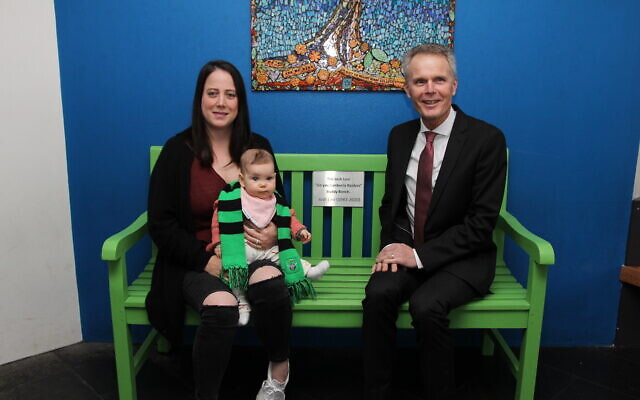 JOSHUA Levi’s memory and love of the Canberra Raiders rugby league team have been honoured with a new bench at Sydney’s Mount Sinai College in the late AJN CEO’s name.

Meanwhile, trees were planted by JNF in Israel last Sunday to honour Levi and another communal stalwart taken too soon, former NSW Jewish Board of Deputies president Jeremy Spinak. Both passed away aged 36.

Explaining that the school wanted a way to remember Josh, Mount Sinai College principal Phil Roberts, who taught Josh in primary school, recalled his devotion to the Raiders and how he would come into class mimicking how the commentator would call the game.

“We wanted to find a way of remembering Josh and honouring him and we came up with the idea of the green Raiders-coloured buddy bench,” he said.

“We realised we didn’t have enough benches anyway and thought another bench in his name with a plaque on it would be a beautiful way of remembering him.”

The Josh Levi “Go you Canberra Raiders” Buddy Bench was conceived in consultation with the Levi family, who have had a long involvement with the college.

“I think it’s awesome Phil has created a safe space for kids to hang out in honour of Josh,” wife Lia Levi said.

“Josh has left an amazing legacy for our daughter, Lara. I along with all the Levi family are so incredibly proud of him.”

This afternoon, two trees were planted in Israel in memory of the late Joshua Levi and Jeremy Spinak, for their…

Turning to the JNF tribute, she said, “I look forward to taking Lara to Israel and showing her the tree planted in her Daddy’s name.

“A huge thank you to JNF for honouring Josh alongside Jeremy, a communal leader Josh had a huge amount of respect for.”

Describing both Josh and Jeremy as “two mensches that gave more in their shortened lives than most people do in 80-90 years”, JNF NSW president David Moses said the community is better for their contributions.

“Both were committed to the longevity and sustainability of the Jewish community here in Australia and the Jewish people as a whole. They led by example [and] they showed great integrity and passion.”

The Spinak family thanked the JNF for facilitating the tree planting ceremony, which took place in the Negev community of Sheizaf.

“It is a beautiful way to honour Jeremy’s name,” they said.

“May the roots of this tree grow deep and its flowers bloom so one day [his children] Michael and Grace can visit and know once more the high esteem in which their father was held.”