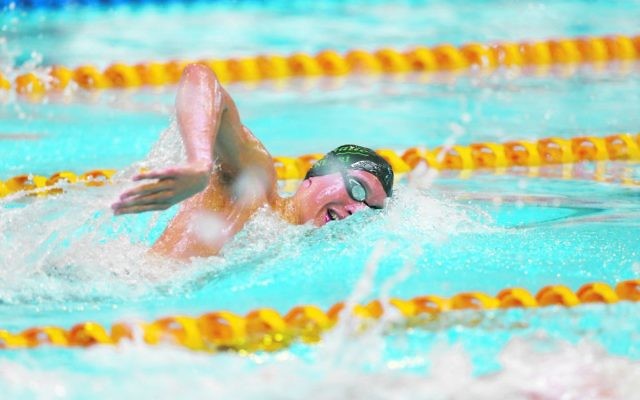 Victoria’s Benno Negri came fifth in the final of the 17-18 Boys 50m freestyle at the 2017 National Age Swimming Championships.

The standout performance was by 17-year-old Jordan Hazan, and his three Melbourne Vicentre Swimming Club teammates, who won gold in the Boys’ 18 and Under 4 x 100m medley relay on April 21.

Hazan’s team won the race in three minutes and 45.42 seconds, almost four seconds faster than their seed time for the meet.

He swam even faster in the final – 23.44 seconds – finishing in fifth place.

Dante Negri, representing MLC Aquatic, finished an impressive sixth in the heat and the final of the 16 Boys’ 50m freestyle.

He touched the wall in the prelim race in 24.28 seconds and shaved

one hundredth of a second off that time in the final.

Dante’s next best finish was 12th in the 100m butterfly.

The best result by a Jewish swimmer from NSW was by Knox Pymble Swimming Club’s Maya Murphy, who equalled her seed time of one minute and 5.8 seconds in the prelims of the 15 Girls’ 100m backstroke to qualify for the final.

She then beat that by eight hundredths of a second to finish eighth.

Victorian Ashley Weill gave a strong showing on the national junior stage, beating her seed time to touch the wall in one minute and 6.19 seconds to finish 11th in the heats of the 15 Girls’ 100m backstroke.