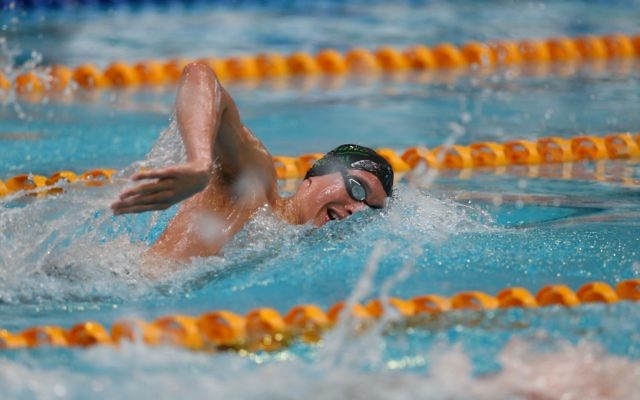 YOUNG Jewish swimmers continue to make a splash at state competitions, with the Negri brothers among the best at the 2015 Victorian Sprint Championships.

Held over the weekend at Melbourne Sports and Aquatic Centre, all distances at the event were 50m long course sprints, giving a true indication of Victoria’s fastest swimmers in each age group.

Benno Negri, 16, swimming for MLC Aquatic, hauled in two gold medals and one silver medal after strong performances. Victories in the freestyle (23.87) and backstroke (27.23) was followed by a second-placing in the butterfly (26.42).

Julian Kowal, who belongs to Melbourne H20, recorded stellar results in the 19-years-old category, as he made the finals in both freestyle and breastroke and finished seventh (24.30) and sixth (31.32) respectively.

Swimming for Wind and Water in the women’s 13-years-old age group was Brooke Roseman, who reached the finals in freestyle (8th place, 29.83) and backstroke (7th place, 33.44).

Ashley Weill also featured in the 13-years-old backstroke final, with the Doncaster & Templestowe Club swimmer’s time of 33.45 seconds was good enough for an eighth-placed finish.

Along with the participants who did not reach the finals, there was a total of 17 Jewish swimmers competing at the championships. They included Jeremy Pitt, Sean Weill, Nathan Faiman, Jordan Hazan, Gemma Ludski, Isabella Smorgon, Lochie Noonan, Ethan Erikson, Jesse Nissen, Tommy Eylon, Zac Nissen, Eliza Klots and Jordana Marks.

This weekend a small Victorian contingent will travel across state lines to partake in the 65th edition of the NSW Jewish Swimming Championships, with more than 140 swimmers from ages six and up expected to make a splash at the Des Renford Aquatic Centre pool on Sunday.

Alon Pajor after setting a personal best at the State Titles.

Since returning from a vacation in Israel mid-January, this budding talent has produced personal best times at consecutive meets, including a powerful showing in the 50m freestyle at the NSW State Age Titles. His effort of 27.26 seconds edged under National Qualifying Times and transpired despite arriving home just two days before the race.

“I hadn’t swam for about five weeks, so by the time I got back I didn’t know how I would feel,” Pajor told the AJN.

“I was in the warm-up pool and I thought, ‘How am I going to do this?’ But I just gave it all I had and did [a personal best].”

The Moriah College student bettered that performance a couple weeks later at the Metro South East Area Speedo Sprints, when he set PBs in 50m backstroke, breastroke and butterfly, while slashing another 0.16 seconds off his national qualifying time for 50m freestyle.

“I am feeling very confident at the moment,” he said.

“Not sure about my chances [at the Jewish Championships] but hopefully I’ll do a few PBs and I’m willing to have a go and just smash it.”

Even with his recent successes, Pajor will be a dark horse in the Championships’ most prestigious event, the Australian Jewish News Open 100m Freestyle Cup.

Recent winners Josh Blumberg and Kyron Israelson will likely battle it out for first place, though Josh Zwi and Zac Freuden may also be in the mix.

In the women’s event, reigning champ and record holder Mikaela Rifkin is looking to continue her dominance at the Champs, while Victorian Junior State squad member Brooke Roseman will look to earn some state pride against the younger local female swimmers.

Pictured: Benno Negri in action at the Victorian Sprint Championships.