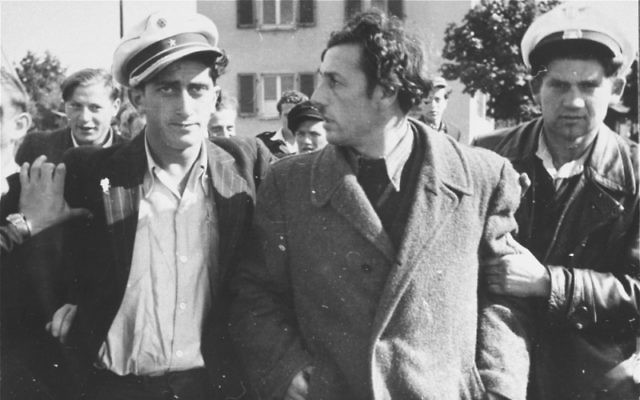 Jewish police detain a former Kapo who was recognised in the street at the Zeilsheim displaced persons’ camp in Germany. (US Holocaust Memorial Museum, courtesy of Alice Lev)

BETWEEN 1950 and 1972 the State of Israel prosecuted approximately 40 Holocaust survivors, accusing them of collaborating with the Nazis in implementing the Final Solution, a set of trials known as the “Kapo Trials”.

This relatively unknown and unexplored topic will be the subject of Dr Dan Porat’s keynote address at this year’s Australian Association for Jewish Studies (AAJS) conference. His lecture, “State of Suspicion: Israel Prosecutes Holocaust Survivors as Nazi Collaborators”, is open to the public.

“Those on trial included Jewish policemen, kapos, and other functionaries in ghettos and camps,” Porat explained. “The courts convicted two-thirds of the men and women who faced trial and all of those convicted served jail time from 10 days to six-and-a-half years. The lecture will focus on these trials, looking specifically at both the causes of these trials and their development as well as at the question of the moral implications of survivor behaviour during the Holocaust.”

When Porat first stumbled across the topic of the Kapo Trials in his research, he was curious as to how the State of Israel, which absorbed over half-a-million survivors, had at the same time investigated hundreds of them as suspected Nazi collaborators.

“In recent years, as archives began to open, a few other researchers have begun to study this topic but overall this is an unknown topic,” he said. “The lack of knowledge comes from two sources. First, the state archives, as well as the Yad Vashem archive, have prevented access to the material related to these trials. Second, the idea that a few Jews may have acted in questionable ways – with no Germans in sight and not under immediate duress – does not match the dichotomy we have of victim and perpetrator.”

Porat notes that one of the most interesting cases he studied was the story of a kapo who had murdered a group of Jews in his camp with no Germans in sight. He was sentenced to death by the Tel Aviv district court, but this ruling was overturned by the Supreme Court.

“The idea of the grey zone, by which some Jews served the Nazis, counters our ideas of the Holocaust and thus we ignore these middle ground stories,” he explained.

Other speakers at the conference, whose theme is “Narratives and Counter-Narratives: Jews, Nation and Nationhood”, include author and ABC broadcaster Rachael Kohn and former AJN editor and co-author of Let My People Go: The Untold Story of Australia and the Soviet Jews 1959-89, Sam Lipski.

Noting that the conference marks the 30th anniversary of the AAJS, co-convenor Dr Avril Alba said, “As the umbrella organisation for higher Jewish studies in Australia the AAJS plays a vital role in ensuring that tertiary Jewish studies continues to grow and flourish in the Australian setting.”

Dr Dan Porat‘s talk is on February 12 at 4.35pm at the Sydney Jewish Museum.