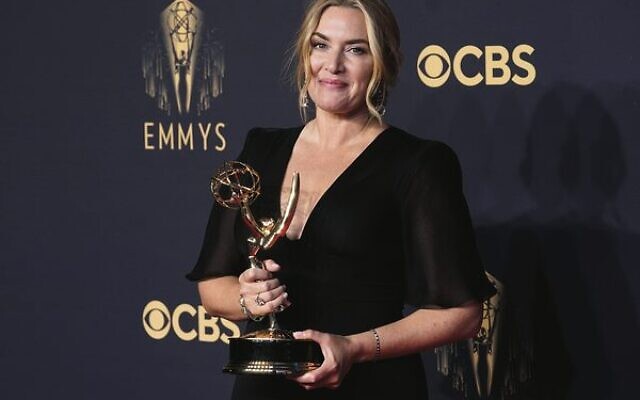 British actress Kate Winslet has clarified to Jewish News UK her involvement in a new film on the Israel-Palestinian conflict released this week, whose co-director is closely linked to Hamas.

The Oscar-winning actress provides the voice-over for Eleven Days In May, co-directed by Michael Winterbottom and Gaza-based Mohammed Sawwaf, who accuses Israel of “colonialism” and “apartheid”.

The traumatic 90-minute film depicts the deaths of 67 Gazan children during last May’s conflict between Israel and Hamas, and shows harrowing images of dead children.

Winslet is then heard reading from the script, “Israel loaded up its fighter jets and the bombardment began.”

There is mention of “seven rockets” fired from Gaza, not the total number of 4360, dozens of which were launched prior to the 11-day conflict.

One of the teenagers depicted, Mohammad Saber Ibrahim Suleiman, was killed beside his father, a Hamas commander. At least one other victim shown in the film was among seven killed by Hamas rockets fired from Gaza that fell short.

Eleven Days In May‘s co-director, Sawwaf, runs Gaza-based production company Alef Multimedia, which specialises in “pro-resistance dramas”. Sawwaf has endorsed claims of Israeli “apartheid” and “colonial policies” on social media and retweeted a cartoon expressing “the joy of the Palestinians over the killing of the Israeli soldier”.

He calls the film “a souvenir for children victims of the Israeli aggression”. Former Hamas leader Ismail Haniyeh attended a ceremony honouring the Sawwaf family, while the filmmaker’s father Mustafa is a former editor of Hamas’ daily newspaper and has been photographed attending a Hamas rally.

Speaking to Jewish News UK, Winslet, who worked with Michael Winterbottom on the 1996 film Jude, said, “Michael invited me to narrate a documentary he was making with the support of UNICEF and Oxfam, on the impact of war on children. In this case, the children of Palestine.

“I’ve trusted Michael for over 25 years, so put my faith in him to ensure the final product befitted these admirable humanitarian organisations. The decision seemed simple.

“I did not speak to anyone else involved. I’ve been a supporter of UNICEF and Oxfam’s work protecting innocent children for decades and therefore offered my services on a no-fee basis, instead requesting a donation be made to Oxfam.

“That my participation could be interpreted as taking a stand on the rights and wrongs of one of the world’s most tragic and intractable conflicts never entered my thinking. War is a tragedy for all sides. Children have no voice in conflict. I simply wanted to lend them mine.”

UNICEF said, “Following an approach from Michael Winterbottom and Revolution Films, we provided guidance on how to respect the rights of children mentioned or participating in the film. UNICEF has had no communication at all with Mr Mohammad Sawwaf, the film’s co-director. UNICEF did not contribute to scripting or financing of the film, has no formal association with the film, and the views of the film are those of the filmmakers, not of UNICEF.”