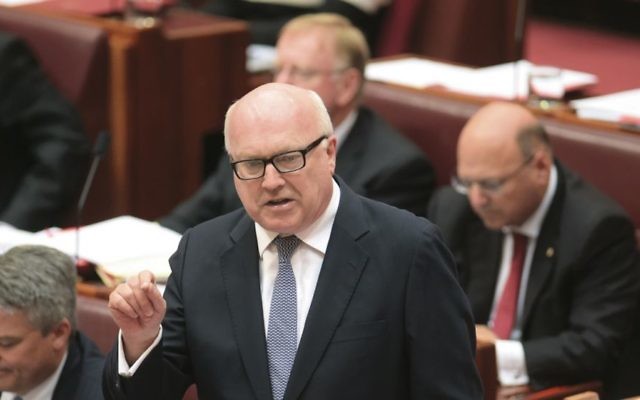 Attorney-General George Brandis has argued that people have the "right to be a bigot". Photo: AAP Images/Lukas Coch

The calls came in submissions to an inquiry into the RDA by Parliament’s joint committee on human rights, amid renewed calls to amend or even repeal Section 18C, which outlaws acts “reasonably likely … to offend, insult, humiliate or intimidate”.

In its submission, the Executive Council of Australian Jewry (ECAJ), while praising freedom of speech, reflected that “the limits of freedom are reached when its exercise causes harm to others”.

Calling for the preservation of Section 18C, the ECAJ rejected the view that “offend” and “insult” are a “subjective test”. “In every decided case under Section 18C, without exception, the court has made its own assessment by applying an objective test based on a community standard, regardless of the subjective perceptions of the complainant.”

ECAJ executive director Peter Wertheim told The AJN: “I urge people to read through the ECAJ’s annual reports on anti-Semitism in Australia which demonstrate that we continue to need a legal remedy against anti-Jewish hate speech as a last resort, when education, debate and all other means of redress have failed.”

In its submission, the Australia/Israel & Jewish Affairs Council (AIJAC) argued freedom of expression does not supersede all other rights anywhere in the world, nor does Section 18C stifle free debate in Australia.

AIJAC said the words “offend” and “insult” in 18C do not constitute a “hurt feelings” test, as some claim, as no court judgement has ever treated the legislation as such.

Its executive director Colin Rubenstein said, “The rise of populist, extremist groups from all wings of the political spectrum and their associated ugly rhetoric have only strengthened the necessity of maintaining strong protections against racial hatred.”

The Jewish Community Council of Victoria made a joint submission as part of a coalition of 84 faith, multicultural and community organisations, stating: “We would not like to see 18C or 18D of the RDA changed, except to strengthen it by explicitly adding religion into the protections,” and noted free-speech protections in Section 18D.

NSW Jewish Board of Deputies CEO Vic Alhadeff commented: “As an ECAJ constituent, we agree that there is zero benefit in removing or diluting 18C … We do, however, believe there is merit in reviewing how claims are processed to ensure that the Commission can throw out claims which have insufficient merit at an early stage.”

However, in a sign that not all members of the community agree with the roof bodies, Melbourne’s Avi Yemini and Sydney’s Dr David Adler made a submission, which they claim reflects “both democratic and genuine Jewish values and both these compel the repeal of 18C and 18D”.

Stating they have received “broad support” in the community, including from “some of the most senior rabbis”, their submission argues that “inhibiting free speech and laws like 18C have not been effective anywhere in combating anti-Semitism.”

They also stated that Jewish secular bodies, while arguing to keep 18C as it is, use it rarely, and have not used it to deal with Islamic hate preaching against Jews, despite having been given specific examples.