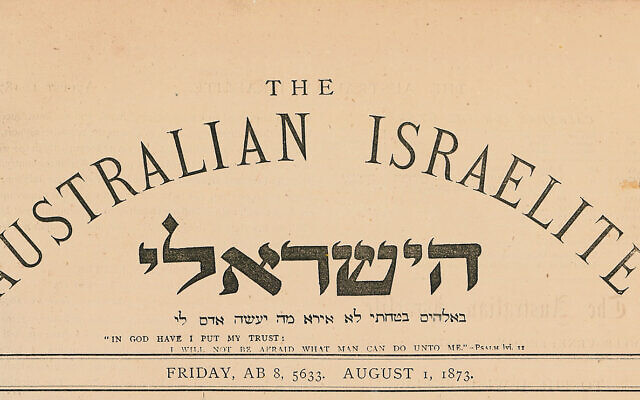 The Australian Jewish News that you are now reading is the ultimate successor to the Hebrew Standard, which was first printed in Sydney on November 1, 1895.

However, the history of the Jewish press in Australia dates back to a much earlier time.

The first Jewish newspaper to appear in Australia was known as the Voice of Jacob or the Hebrews’ Monthly Miscellany, and was published on May 27, 1842. Sydney based, its aim had been “to disseminate knowledge of Judaism throughout the Australasian colonies” but it soon failed.

1871 saw commencement of publication in Melbourne of The Australian Israelite, which lasted for four years; its aim as stated by its editor Solomon Joseph was “to aid in the great task of the progress of Judaism”.

The first more long-lasting Australian Jewish newspaper was the Jewish Herald, which began (originally as a monthly) in December 1879. It survived (under various mastheads) for almost 90 years, and will still be remembered by at least some readers of this column. I well recall how my parents subscribed to both the Jewish Herald and the Jewish News (both in Yiddish and in English), which was a common practice in the postwar Melbourne Jewish community.

It is not possible in a column of this length to do justice to the changes which have occurred in the scope, coverage and editorial attitudes of the Australian Jewish press over the past 125 (let alone 180) years. But there is no doubt that in earlier times, religious issues – particularly synagogue-related matters – occupied a more significant place in the content of the papers. In many ways this reflected not only the fact that synagogues were a more significant feature of the communal structure of the times in the absence of lay-led communal bodies, but also the extent to which the earlier rabbinate saw itself as having a broader role in the community.

In her history of the Australian Jewish press, Suzanne Rutland notes that, following his 1905 arrival in Sydney as chief minister of the Great Synagogue, Rabbi Francis Lyon Cohen played a vital role in the history of the Hebrew Standard. A close friend and confidant of its editor Alfred Harris, he attempted to influence its editorial policies in directions beneficial to the synagogue, and almost every week for 29 years his sermon was published on the front page. The paper also supported his vocal opposition to Zionism, and (even prior to Rabbi Cohen’s arrival) was utterly opposed to Reform Judaism.

Even more significant was the level of involvement in the Jewish press of Reverend Elias Blaubaum, the first chief minister of St Kilda Hebrew Congregation, who as foundation editor of the Jewish Herald (until his death in 1904) maintained a platform of Orthodox Judaism while allowing a wide range of opinions in the correspondence columns. Interestingly, one such correspondent as early as the 1880s was the reformist Isaac Jacobs, whose contributions to the paper included discussion of such matters as the complexities of the “yotzrot” (poetic insertions in prayers on special occasions), the recital of which he opposed for a variety of reasons including their complicated syntax. Could one imagine such pieces appearing (and presumably being read) today?

A feature of the Herald during Reverend Blaubaum’s time was a regular round-up of the highlights of sermons delivered in the various synagogues of the day.

Another rabbi who occupied an editorial position with a forerunner of today’s AJN – in this case during World War II – was Rabbi Chaim Dov Silver, who had arrived in Australia together with a young Chaim Gutnick as part of the group of Lithuanian yeshivah students with British passports who escaped the Nazis by crossing Russia and then reaching Australia via the Far East. Rabbi Silver is of course best remembered in this community for his educational input in the days of Talmud Torah education in Carlton prior to his aliyah to Israel. He saw his editorial role as a form of adult education complementing his Talmud Torah work.

Although he never occupied an editorial role at the paper, Rabbi Shlomo Rudzki, successor to Rabbi Silver at the Hascola Talmud Torah and long-serving rabbi of the South Caulfield Hebrew Congregation, was for many years the regular contributor of a parasha column which appeared regularly in Yiddish and occasionally in English.

In recent years, many members of the rabbinate have made occasional or more regular contributions to The AJN, namely Rabbis Raymond Apple, Chaim Ingram, Aron Moss, Daniel Rabin, Yaakov Glasman, Michoel Gourarie and Ralph Genende. Many others from both the Orthodox and Progressive communities contribute from time to time. The late Rabbis Ronald Lubofsky, Israel Porush and Azriel Tarsis, among others, also played their part in the history of the Australian press.

The reality is that a newspaper can provide a forum for rabbis to reach those not normally a part of their respective congregations. For many in the community, The AJN is their major contact point with Australian Jewry at large.

Perhaps more rabbis should follow those pioneers of the earlier days of the Australian Jewish press, who used every opportunity to transform their personal roles from being a leader of their congregation to one of the broader community. As editor of the Shabbat Shalom section of The AJN, subject to weekly space constraints, I for one certainly welcome rabbinic contributions and am particularly appreciative of those who respond to my request for parasha pieces or timely articles relating to other issues of the moment.

Hopefully, whether in print or digital format, The AJN will long continue to serve our community, thereby continuing a tradition established 180 years ago.