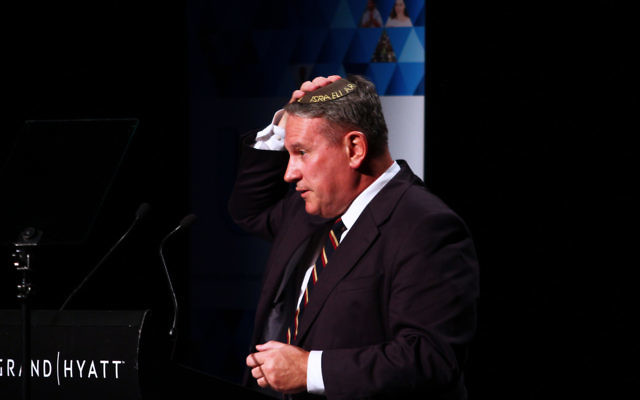 “I’M going straight from here to Paris and when I go there I’m going to wear this on my head,” declared British colonel Richard Kemp, donning a kippah to thunderous applause during his address to the United Israel Appeal (UIA) gala dinner at the Grand Hyatt in Melbourne.

“Actually this is not just an ordinary kippah, this says ‘Israel Army’ on it, so hopefully it will be even more provocative.”

For the 550 assembled donors, the retired soldier, a non-Jew, who helped refute allegations about Israel’s treatment of civilians during Operation Cast Lead in 2009 and advised Israel during Operations Pillar of Defence in 2012 and Protective Edge last year, this was another declaration of his in-your-face support for Israel and Jews.

Kemp’s uncompromising friendship has been a powerful antidote to politically correct platitudes in Paris and Copenhagen after the terrorist murders of Jews there, and to a slavish world media he said is bent on demonising Israel and minimising the reality of anti-Semitism.

Condemning the disruption of his lecture at the University of Sydney earlier this month, Kemp stated: “Dress it up however you like, that was an attack by non-Jews on a group of Jews.”

“You in this room have a major role,” he exhorted UIA donors. “You’re not only saving the lives of Israeli civilians but of innocent Palestinian civilians.”

Kemp said his analysis found some half of around 2000 Palestinians killed in last year’s Gaza war were complicit with terrorism, unlike UN figures, which claimed 1500-1800 were “innocent civilians”, a ratio he said came from Hamas sources.

“Hamas’s whole strategy is about civilian casualties. They know they can’t beat Israel … They start off by luring Israel into carrying out an attack by firing rockets with an intensity Israel cannot ignore, no country could ignore. They put all their weapons systems within the civilian population, willing Israel to kill their own civilians. They don’t use human shields, they use human sacrifice … so that Israel will be isolated in the world,” he said. “And they’re very successful at it.”

Kemp said when he investigated a Hamas tunnel that led terrorists to a kibbutz, he was struck by its “amazing workmanship”.

“A few months before I was in that tunnel, I was in Auschwitz … I saw superb construction … engines of death. Auschwitz and those [Hamas] tunnels existed for one purpose and one purpose only, to kill Jews.”

Also speaking at the event was Lieutenant Colonel Ira “Chezy” Deutsch, former director for International Relations of the Home Front Command, who graphically described the 15-second window Israelis have to find shelter during Hamas rocket attacks.