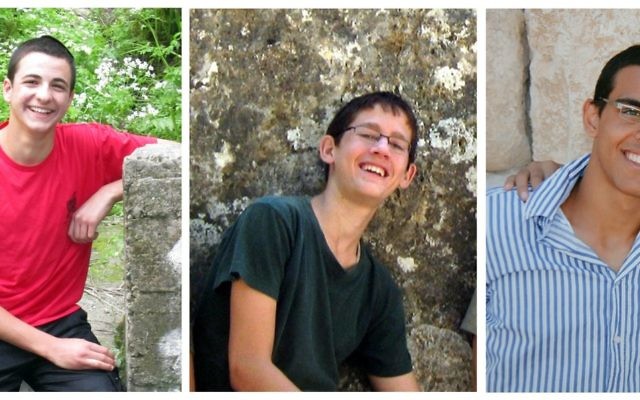 JEWISH communal organisations in Australia have condemned the kidnapping of three Israeli teenagers by Hamas terrorists in the West Bank.

Israeli security forces launched a full-scale search and made widespread arrests in a bid to locate the trio, Gilad Shaar and Naftali Frenkel, both aged 16, and Eyal Yifrah, 19, after they were abducted from Area C, an Israeli-controlled section of the West Bank south of Hebron.

The three vanished late on Thursday night, Israel time, after they caught a ride at a hitchhiking post in the Gush Etzion region.

Executive Council of Australian Jewry president Robert Goot said Jews in Australia “join with the people of Israel, and decent people everywhere, in praying for the safe return” of the three youths.

“There can be little doubt that Hamas terrorists abducted them, and that the Palestinian Authority (PA), by establishing the Fatah-Hamas pact, has opened the door to wider Hamas activity in the West Bank. The PA is playing a dangerous double game. On the one hand, it is going through the motions of engaging in security co-operation with Israel to rescue the teenagers. On the other hand, the PA-controlled media openly exults in the crime.

“If the Palestinians want to be a state, they must start to behave like one. The PA bears full responsibility for the lives and wellbeing of the kidnapped teens and for all terrorist activity emanating from areas under its control” said Goot.

“With the ink barely dry on the Palestinian unity agreement, we demand that Palestinian Authority chairman Mahmoud Abbas puts everything into assisting the Israelis in locating the boys.

“Unfortunately, this scenario has become all too familiar for Israelis, and we pray for their safe return to their families. The Australian Zionist community stands in solidarity with the people of Israel, and in particular the families involved, at this time”.

Jewish Community Council of Victoria president Nina Bassat said: “This is an act of outrage which must be condemned by the whole civilised world. With the people of Israel we pray for the boys, for their families and for their safe and speedy return.”

Australia/Israel & Jewish Affairs Council executive director Dr Colin Rubenstein said: “Together with Israelis, and all people of good will, our thoughts and prayers are with the kidnapped boys and their families, and we hope for their safe and immediate return.

“It is deplorable that Hamas continues to call for the abduction of Israelis and is reported to have celebrated this latest kidnapping. This only underlines the extent to which the latest Fatah-Hamas unity agreement constitutes both a blow to peace hopes and a danger to security,” he stated.

New Israel Fund Australia president Irving Wallach stated: “We hope that the efforts of both the Israeli and Palestinian security services meet with success and bring them home safe and sound. May those responsible be brought to justice. We express our deepest concern that this terrible episode ends without further violence and harm to civilians, be they Israeli or Palestinian.”

Melbourne Ports MP Michael Danby was quietly hopeful that Abbas might cooperate in finding the three. “This is to be welcomed, although Hamas, Fatah’s new partner, has slammed all assistance in finding the boys, and referred to the kidnappers as ‘heroes’. As most believe Hamas is involved in the kidnapping, such a repugnant position is hardly surprising.”

Caulfield MP David Southwick described the abductions as “barbaric behaviour … these three boys, and make no mistake, at 16 and 19 years old, they are just boys, have been taken by extremists to further their cause”.

Meanwhile, Israel’s ambassador Shmuel Ben-Shmuel said the kidnappings were an “unsurprising” consequence of the new Hamas-Fatah alliance. “It proves that a mere 10 days after an alliance was inked, the fairytale is over and that a Fatah-Hamas peace deal is anything but peaceful … Australia, like countless other western countries, legally considers Hamas as a terrorist organisation, whereas President Abbas considers them an ally.”