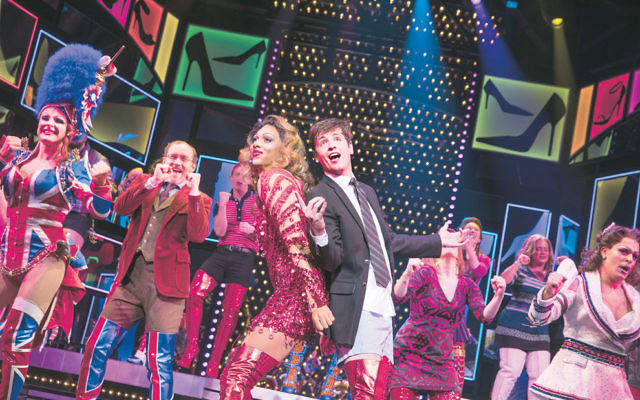 MUSICAL REVIEW of Kinky Boots by Danny Gocs — Harvey Fierstein’s story of a struggling family-owned shoe business in England that is at the crossroads when the son does not want to join the business will resonate with many people.

However, on the stage it’s a flamboyant drag queen who comes to the rescue in the lavish and entertaining musical Kinky Boots, which had its Australian premiere at Her Majesty’s Theatre on October 22.

With songs by pop star Cyndi Lauper and direction and choreography by Tony-award winner Jerry Mitchell, Kinky Boots is an energetic production.

After Charlie Price (Toby Francis) inherits the shoe factory in Northampton, he faces a bleak future. However, a chance encounter with drag queen Lola (played by Callum Francis who performed the role on the West End) opens Charlie’s eyes to a potential money-spinner: high-end ladies’ boots for men.

Lola and her band of drag queen dancers descend on the factory, but face battles against the -small-minded attitudes of some staff.
In the process they star in plenty of brash dance routines that have the audience cheering along to numbers such as Everybody Say Yeah and Raise You Up/Just Be.

With shades of Priscilla, Queen of the Desert, there’s plenty to enjoy in Kinky Boots, with excellent performances from the leads.

Kinky Boots is at Her Majesty’s Theatre, Melbourne. Bookings: www.kinkybootsthemusical.com.au.