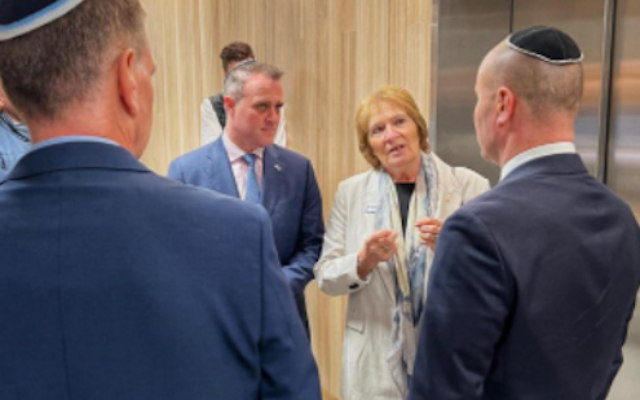 THE Executive Council of Australian Jewry (ECAJ) has called on independent Goldstein candidate Zoe Daniel to “disassociate herself completely” from a tweet posted by the group that has endorsed her.

The tweet posted on Monday by Voices of Goldstein, which has since been removed, showed a photo of treasurer Josh Frydenberg, federal Goldstein MP Tim Wilson and state Caulfield MP David Southwick wearing kippahs at the reveal of the newly renovated Melbourne Holocaust Museum last Friday.

“What sort of idiotic virtue signalling garbage is this? Why do they all have yarmulkes on? It is a museum, not a synagogue,” the tweet said.

“This sums up modern Liberal party perfectly. All bullsh*t photo op. No substance.”

A post on Daniel’s Facebook page on Tuesday night stated, “Voices of Goldstein is not connected to Zoe’s campaign.”

Daniel also posted, “Voices of Goldstein asked me to run. My campaign is a separate entity run under a separate company.”

Campaign volunteer Rabbi Yaron Gottlieb, who is behind the tweet, told The AJN it was “a personal reflection and should have been posted from my personal account”.

“When I saw the Liberal MPs walking around with yarmulkes in a museum it angered and upset me personally and that was the context of the tweet,” he said.

ECAJ co-CEO Peter Wertheim said to criticise any Jew for wearing a kippah, “especially in such a context, is thoroughly disgusting, even if the critic also happens to be Jewish”.

“Both Jewish and non-Jewish visitors to museums and memorials often wear a kippah as a mark of identification, respect and solidarity,” he said.

“We call on Zoe Daniel to repudiate this criticism … and to dissociate herself from it completely.”