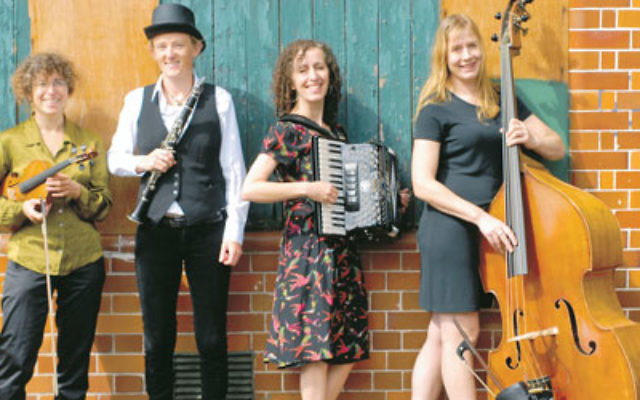 TRADITIONAL klezmer music from Eastern Europe is given a new mix by the London Klezmer Quartet, which has started a month-long Australian tour.

The all-female quartet, which toured for three weeks around Australia last year, will play at six music festivals ranging from Port Fairy in western Victoria to the Blue Mountains, plus venues such as the Famous Spiegeltent in Melbourne and the Sydney Jewish Museum.

Clarinetist Susi Evans says the group enjoys touring. “It’s great fun,” she says by phone from London on the eve of departing for Perth, where the tour started last week.

It was the 2012 tour that led to Australian musician Indra Buraczewska, who plays the double bass, joining the quartet.

“When we were booked for the tour of Australia last year, our cellist had a commitment to a wedding in the Caribbean and could not tour, so we decided to look for a double bass player who lived in Australia,” explains Evans.

“Klezmer music is niche and not something that everyone can do. We auditioned musicians on Skype.”

She says that some of the Skype auditions were jam sessions, but sound delays over the internet made it difficult, so the musicians being auditioned then played along to a CD.

“We auditioned Indra and she was fantastic. She came to London in August to record the new album and we are looking forward to working with her again on this tour.”

There are two Jewish members in the quartet – fiddler Ilana Cravitz and accordionist Carol Isaacs.

Cravitz, a classically trained violinist who has studied at the Royal College of Music in London, has been playing klezmer music for about 20 years. She has also written a book, Klezmer Fiddle: a how-to guide.

Isaacs, who plays piano accordion, is a classically trained pianist who has recorded and toured with many international artists, including Sinead O’Connor, Bonnie Raitt, Jackson Browne and Robert Palmer.

Evans, who has been playing klezmer music for more than 12 years, has also performed on the West End stage in War Horse.

“I was in the show in 2007 for a short period and still get asked to play in it every so often. War Horse is a great show and almost every performance is still sold out.”

“We have a vast repertoire to choose from and a well-grounded take on the traditional style of klezmer music,” she says.

Evans says that klezmer is enjoying a growing revival around the world.

“In London, in the past 10 years or so, there has been a massive response to klezmer music, as there are more bands playing this style of music.”

The London Klezmer Quartet, which was formed in 2009, will conduct some klezmer workshops during the tour. The group recently released a new CD, Butterfield Green N16, featuring material inspired by their travels and living in London.

Booking information on the London Klezmer Quartet’s Australian tour is at www.londonklezmerquartet.com.