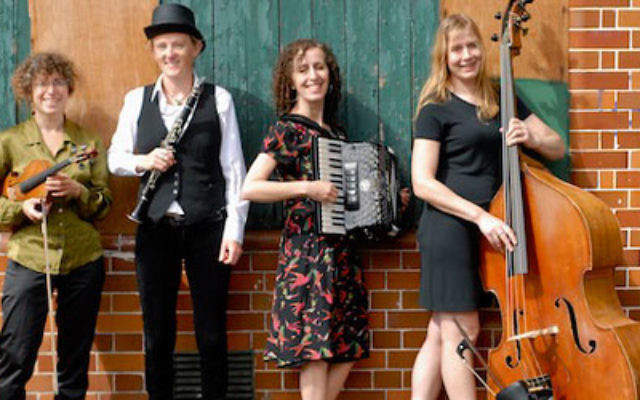 AUSTRALIA is becoming a second home for the London Klezmer Quartet, which has just started its third Australian tour in two years.

The all-female group kicked off its latest six-week tour with a concert at the Hobart Synagogue earlier this month, and will travel to NSW, Queensland, ACT and Victoria, performing at communal halls and local venues as well as recital centres and festivals.

One of the two Jewish members in the quartet, fiddler Ilana Cravitz, says the group likes to travel to new places to perform while in Australia.

“We are often surprised that in off-the-beaten track places where we think nobody has heard of klezmer, the crowds come out to hear us.”

Cravitz has been playing klezmer music for about 20 years in Britain and is the author of a reference book, Klezmer Fiddle, published in 2009.

“I first heard the sounds of klezmer when I was wandering around the streets of Leeds in northern England and heard a band performing,” she says.

“The music sounded familiar, as if I knew it from deep within my soul, so I hunted the band down and that was the beginning of my fascination with klezmer.

“Who could have imagined that 25 years later I would be performing klezmer in Australia?

“Klezmer has undergone a great revival – for a while people did not want to hear the music because they associated it with the sad period in history in Europe.

“People now appreciate klezmer music because it gets their toes tapping and celebrates life – the joy is there as well as the more soulful sounds.”

Cravitz, a classically-trained violinist who studied at the Royal College of Music in London, says their musical style is a mixture of traditional sounds and new compositions.

“We like to say that we play new traditional and old traditional music – people often ask us where a piece of old-sounding music came from and we explain that it was something that was only written last week!”

One reason that the London Klezmer Quartet visits Australia regularly is that there is an Australian musician in the group – Indra Buraczewska, who plays the double bass.

Buraczewska was recruited after the group’s original bassist had a commitment to a wedding in the Caribbean and could not tour Australia in 2012.

“Indra refuses to move to London so it means we have to keep coming back to Australia to play with her,” says Cravitz with a laugh. “For gigs in the UK we use a local double bass player, Rupert Gillett.”

Buraczewska, whose family is from Latvia, worked on the London Klezmer Quartet’s Butterfield Green, N16 CD that was launched a year ago when the group last toured in Australia.

Accordionist Carol Isaacs has a Sephardi heritage and is a classically-trained pianist and a pop musician who has recorded and toured with many international artists, including Bonnie Raitt, Jackson Browne, Robert Palmer and Sinead O’Connor.

Cravitz says the London Klezmer Quartet plays a lot of historic material including works from prewar archives including from the acclaimed Moshe Beregovski collection.

“Beregovski was very active in collecting music out in the field, making hundreds of recordings of violinists in the shtetls of Ukraine in the 1930s playing klezmer,” says Kravitz.

Beregovski’s archive of wax cylinders was thought to have been destroyed during World War II, but was discovered in a library in Kiev during the 1990s.

During this tour the London Klezmer Quartet will perform at Jewish venues including the Sydney Jewish Museum and North Shore Temple Emanuel and will visit Brisbane for the first time. There will also be klezmer workshops and dance events.

For tour details, go to www.londonklezmerquartet.com.