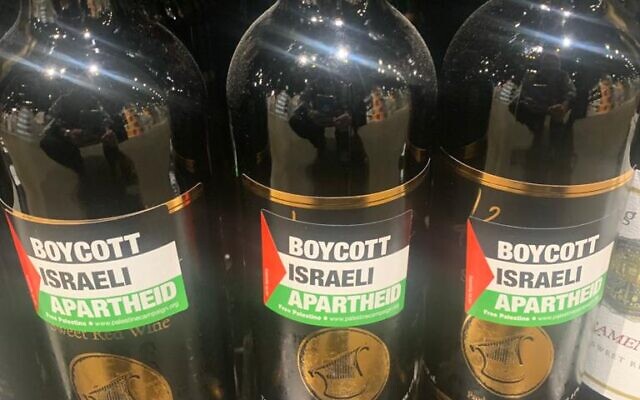 Stickers on kosher wines at Dan Murphy’s in East Brighton.

STICKERS calling to “Boycott Israeli Apartheid” have been discovered on a number of kosher wines made in Israel sold at a Dan Murphy’s store in Melbourne.

The discovery was made on Wednesday by a Jewish man in his 50s whose late grandparents were Holocaust survivors, shopping at a Dan Murphy store in East Brighton.

When the individual alerted staff, the stickers were immediately removed.

Anti-Defamation Commission chairman Dvir Abramovich told The AJN on Thursday morning, “Members of the Jewish community cannot even go shopping without being assailed by a full-throated antisemitic movement.

“This dangerous action, reminiscent of the Nazi campaign of ‘Don’t Buy from Jews!’ must be forcefully condemned.

“Who would have thought that a liquor store in Melbourne would be hijacked by BDS (Boycott, Divestment and Sanction) advocates who are willing to use underhanded tactics, intimidation, and the vicious slur of apartheid to promote their warped cause?”

Stating that calls to boycott Israeli goods “creates a climate of incitement and hostility”, Abramovich added, “We call on Dan Murphy’s to be extra vigilant in ensuring that such incidents do not occur again.”

In a statement, a spokesperson for Dan Murphy’s said, “We want everyone to feel welcome and be treated with respect in our stores. Our code of conduct makes it clear to all team members that discrimination and racism is unacceptable and will not be tolerated in our business. We expect the same from our customers.

“We didn’t authorise the placement of these stickers. As soon as this was brought to the attention of our team by the customer, the stickers were removed and discarded. This appears to be an isolated incident in the Dan Murphy’s Brighton store.

“Our state and area managers have been notified of the incident, and our store teams will monitor closely for any further instances of this occurring and know to remove unauthorised stickers and any other unauthorised materials.”

Welcoming the retailer’s “strong statement” that “sends the unmistakable message that antisemitism will never find a haven in any Dan Murphy’s stores”, Abramovich told The AJN on Friday, “This is a reminder that companies have a commitment and a responsibility to speak against the abhorrent scourge of Jewish hatred in all its forms and support the Jewish community as allies.

“This is integral to our safety and to our ability to live freely and securely in this multicultural nation.”

Do you know more? Email letters@jewishnews.net.au.