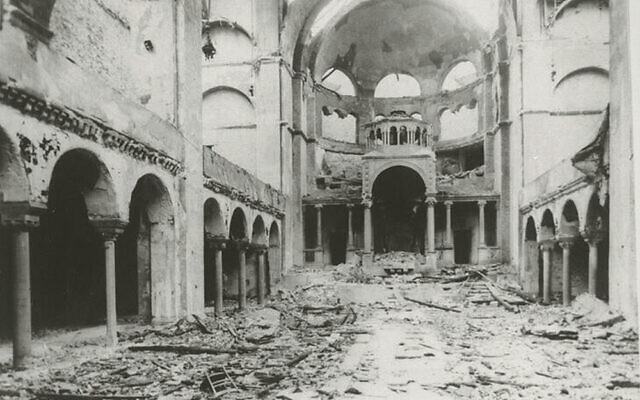 On the nights of November 9 and 10, 1938, rampaging mobs throughout Germany, Austria and Sudetenland freely attacked Jews in the street, in their homes and at their places of work and worship in a carefully orchestrated outbreak of government-sponsored violence. At least 96 Jews were killed and hundreds more injured, hundreds of synagogues were burned, almost 7500 Jewish businesses were destroyed, cemeteries and schools were vandalised, and 30,000 Jews were arrested and sent to concentration camps, many of them never to return alive to their loved ones.

Many historians consider that as the real beginning of the Holocaust, the first step in the planned extermination of the Jewish people leading to the eventual deaths of six million victims of the Nazi program of genocide.

For that reason it is certainly proper to commemorate this harbinger of horror, the infamous dates that mark the onset of the spiral of unimaginable hatred unloosed among a supposedly civilised people. What is unfathomable to me, though, is the name by which this commemoration continues to be known.

This month Jewish communities throughout the world will once again gather to recall Kristallnacht – and will unwittingly allow themselves, in some measure, to verbally embrace the very heresy that abetted the Holocaust.

Kristallnacht is German for “the night of crystal”. But the time that has elapsed since the horrible events of 1938 should have given us by now sufficient perspective to expose the lie of a horrible WMD – “Word of Mass Deception” – that epitomises the key to the most powerful methodology for murder perfected by the Nazis.

How, after all, were the Nazis able to commit their crimes under the veneer of civilised respectability? Upon analysis, the answer is obvious. They glorified the principle of murder by euphemism.

In the language of the Nazi perpetrators: “Sonderbehandlung” (special treatment) was the way to describe gassing victims. “Euthanasie” was the “polite” way to speak of the mass murder of retarded or physically handicapped patients. “Arbeit Macht Frei” (Work Makes you Free) were the words that greeted new arrivals at the entrance to Auschwitz.

Euphemisms, as Quentin Crisp so brilliantly put it, are “unpleasant truths wearing diplomatic cologne”. On the simplest level the name Kristallnacht suggests that the only terrible thing that happened was breakage of a tremendous amount of glass that would have to be replaced – a financial loss caused by wasteful vandalism that the government subsequently dealt with by taxing the Jewish community to pay for the damages inflicted upon them.

However “Kristallnachtâ” was the German euphemism for a time of sanctioned killing. The word takes into account only the loss of “kristall”, and is one reason why its continued usage is so appalling.

But there was more to it than that.

Dr Walter H Pehle, a historian specialising in modern Germany, has already pointed out that Kristallnacht’s original intent was cynically propagandising the violence into something metaphorically holding “sparkle and gleam” for Germany.

Almost by way of confirmation, in googling the English for “crystal night” I was startled to find among the many references that related to the night of Nazi terror, the inclusion of the following advertisement: “For an extra-inviting glow, consider using Sylvania’s new C7 Crystal night light bulbs in your electric candles. The multi-faceted crystal lights provide a warm, sparkly glow.”

It is that very connection that played no small role in Goebbels’ choice of a descriptive word for a moment that the German Minister of Propaganda wanted to immortalise as a sparkling and glowing portend of a future rid of its “Jewish parasites”.

We must proclaim that we commemorate not broken windows but shattered lives.

Why then would we choose to identify the night of initial mass murders with a word that not only ignores everything other than broken glass, but in fact glorifies its results as gifts of crystal clear light to the distorted truths of Nazi ideology?

To remember Kristallnacht properly we must first renounce its German-given name.

We must proclaim that we commemorate not broken windows but shattered lives.

We must pledge never again to allow evil to enter our lives disguised as the good and the noble.

We must declare that no euphemisms will ever again be permitted to cloak the horrors they intend to conceal.

Kristallnacht must be observed, but let it be known by a name that realistically captures its iniquitous essence. True the current name is ingrained in our psyche. Nevertheless, allow me to suggest that we call it instead “Kainsnacht”, the “Night of Cain,” the first murderer at the very beginning of human history, who was cursed by God and condemned to carry a mark of his crime on his forehead for the rest of his days as a warning to mankind of the severity of his sin.

That would link its commemorative date not with mob acts of breakage and vandalism, but rather with the far more heinous crime of unforgivable murder first committed by Cain.

Rabbi Benjamin Blech, a Professor of Talmud at Yeshiva University, is the author of 19 acclaimed books.
AISH.COM