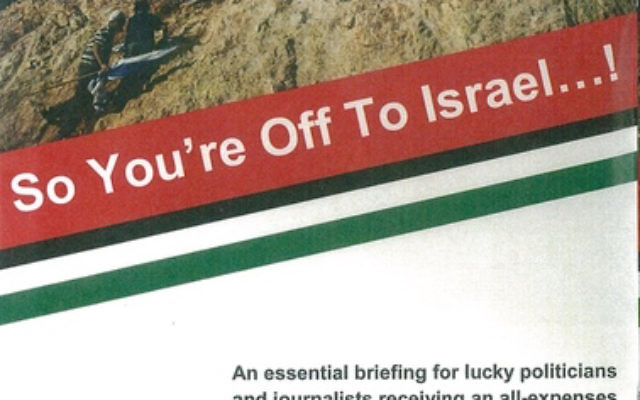 The cover of the booklet.

A BOOKLET produced by Australian Labor Friends of Palestine accusing the “pro-Israel lobby” of sending politicians, party officials and journalists to Israel to get a “carefully orchestrated, one-sided perspective” on the Israeli-Palestinian conflict has been slammed as “disingenuous” by communal leaders.

The publication is billed as “An essential briefing for lucky politicians and journalists receiving an all-expenses paid trip to the Israel of Binyamin Netanyahu”.

It states, “The pro-Israel lobby is very powerful and is responding with one technique: it is spending millions of dollars on sending politicians, party officials and journalists to Israel to get a carefully orchestrated, one-sided perspective on the conflict between Israel and Palestine.

“They aim to soften the critical capacities of the participants with overt generosity. Sometimes this technique works, more frequently it fails.”

The booklet also refers to the “great ethnic cleansing inaugurated in 1948”, and claims that all Israeli settlements are illegal and “being spread to block a Palestinian state”.

NSW Jewish Board of Deputies CEO Vic Alhadeff described the booklet as a “disingenuous mishmash of truths, half-truths and untruths, interspersed with lists of sources which have zero credibility”.

Claiming the “legitimate Palestinian desire for a state is subsumed in this blatant attempt to demonise Israel,” he said, “It’s ironic that the brochure accuses the so-called Israel lobby of funding biased trips, yet encourages participants to hear from groups which offer a jaundiced view.”

Alhadeff insisted it is important for Australian policy makers and opinion leaders to see the situation first-hand so that they can acquire a balanced understanding.

“Vilifying those who are willing to see for themselves hardly assists in ensuring Australia has a sensible foreign policy or that media contribute to an informed debate,” Alhadeff said.

Colin Rubenstein, executive director of the Australia/Israel & Jewish Affairs Council which organises a number of fact-finding trips to the region, said the booklet is “full of emotional language yet light on actual facts, falsely accusing the ‘pro-Israel lobby’ of providing a one-sided perspective while doing exactly that itself”.

“Conspicuous omissions include any acknowledgement that there are Jewish ties to the land over three millennia, any mention of Palestinian terrorism, and the fact that the Palestinian Authority has not only repeatedly declined every final status peace deal Israel has offered but now refuses to even negotiate,” Rubenstein said.

“It is no wonder they don’t want Labor party members to go on study visits to Israel, where they hear from both Israelis and Palestinians about the realities of the conflict.”

He added: “Those who do go on our intensive study visit programs see that the situation is much more complex than the one-sided slogans and emotive appeals that are the stock in trade of groups like Australian Labor Friends of Palestine.”