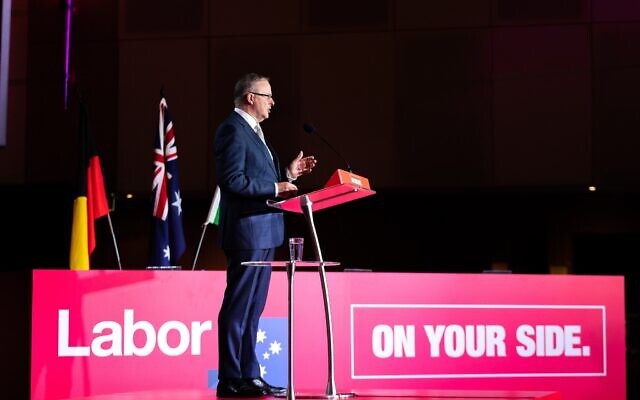 IN the last month, there have been two front page headlines in the AJN about the Israel-Palestine resolution at Labor’s national conference. It’s now time to take a step back and look at the issue with some perspective.

NIF is nonpartisan – we don’t endorse any party or candidate. It’s not our place to support or oppose any resolution of this kind but we do have deep concerns about the way it has been spun to undermine Labor’s standing in the Jewish community.

It’s important to understand that the resolution the party adopted at its conference is the same as the one adopted three years ago. Nothing has changed.

Just like all resolutions at Labor conferences it will inform a Labor government’s policy in the same way that advice from the Department of Foreign Affairs and Australia’s allies will be used to form a cohesive strategy to advance Israeli-Palestinian peace.

That flexibility is important. It’s why former Labor MP for Melbourne Ports Michael Danby supported it three years ago when the same resolution was passed.

It seems this campaign – to paint Labor as somehow anti-Israel – is nothing more than a beat up and a desire to turn the Jewish community away from the Labor party.

Danby is now leading the campaign and his animosity towards the Palestinians has blinded him to the reality on the ground.

He opposes the resolution because the Palestinians are “homophobic, fundamentally undemocratic, kleptocratic [and] misogynist”. What he ignores is that any final resolution to the conflict will involve Israelis and Palestinians realising the shared benefits from forging an agreement despite their differences and antipathy.

Danby has forgotten that Benjamin Netanyahu’s partners have committed the same sins. Homophobic? Netanyahu signed a vote sharing agreement with the Noam party which produced ads comparing the LGBT community to Nazis. Undemocratic? Israel’s justice minister was rebuked by the Supreme Court’s chief justice for claiming some court rulings should be ignored. Misogynist? Ultra-Orthodox parties Shas and United Torah Judaism have a de facto ban on women representing them in the Knesset. And as for kleptocratic, one needs not look further than the currently active corruption trial against the prime minister himself.

The two-state solution is under threat like never before. Yet it remains the only outcome which has any chance of safeguarding Israel as a Jewish and democratic state and giving Palestinians control over their own future. Most recently, it has been besieged by Netanyahu’s flirtations with a formal annexation of the West Bank, even though that reality is currently being forged on the ground without a formal declaration.

Ensuring that both Israelis and Palestinians can live in peace and security will require recognition of a Palestinian state, regardless of whether Labor or the Coalition are in government. There’s nothing disappointing (according to the ZFA), counterproductive (according to the ECAJ), misguided (according to AIJAC) or anti-Israel about that reality.

In fact, over the years, some of Israel’s staunchest allies and most important global partners have already done so in one form or another, including the United Kingdom under then-Prime Minister David Cameron, the European Union and its new Abraham Accords partner the United Arab Emirates.

The Jewish community has long placed bipartisanship at the core of its strategy to ensure support for Israel. Regardless of who is in government, the strategy calls for Australia’s political leadership to support Israel, two-states and the democratic values Australia and Israel share.

What is disappointing, counterproductive and misguided is that Danby and some Jewish community leaders are blowing up the strategy which has served the Australia-Israel relationship so well for 70 years. They have missed the point that Labor’s resolution doesn’t undermine core support for Israel in any way.